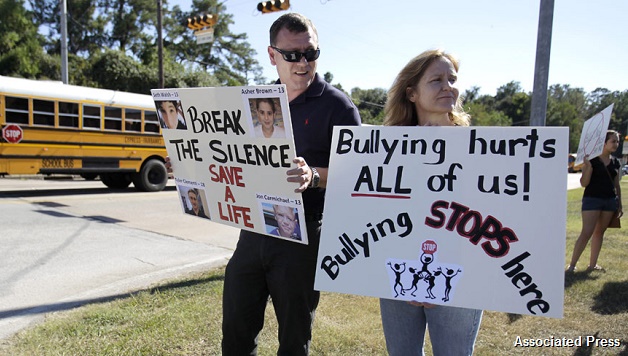 On October 14 in Minneapolis, 1,000 people gathered at a vigil in Loring Park to grieve the loss of students in the Anoka-Hennepin School District and talk about solutions to the national crisis of teen suicide. Across the country, vigils were held in New York, Boston, Los Angeles, and Austin.

The recent suicides of Justin Aaberg, 15 (MN), and Tyler Clementi, 18 (NJ), as well as the bullying and suicides of other gay or perceived gay teens, has gained national attention. Now many students, parents and community organizations across the country are taking action.

In Minnesota’s Anoka-Hennepin School District the crisis is especially serious, with seven children taking their own lives in the 2009-2010 school year. Four of these suicides were directly related to harassment about the student’s perceived sexual orientation. The school district (MN District 11) maintains a “neutrality policy” limiting discussion related to sexual orientation. This policy is similar to the military’s Don’t Ask, Don’t Tell in that it only targets discussion about homosexuality. In Anoka, a new group calling itself the Gay Equity Team has formed to take on the school board and demand a safe and equal learning environment for LGBT students.

The rally in Minneapolis was organized by Join the Impact–Twin Cities and brought together mothers of bullied teens, LGBT youth, community activists and socialists.

After the 2008 passage of Proposition 8 in California banning same-sex marriage in that state, Socialist Alternative played a leading role in organizing a demonstration of 2,000 in Minneapolis. Out of that rally, Join the Impact was formed as part of a new nationwide movement fighting for full equality in all 50 states.

The fight to end the bullying and harassment of LGBT people in schools is an important part of the struggle for LGBT rights. With support for this movement growing, it’s time to fight for an end to policies and bigoted laws everywhere that label LGBT people as being less than human.