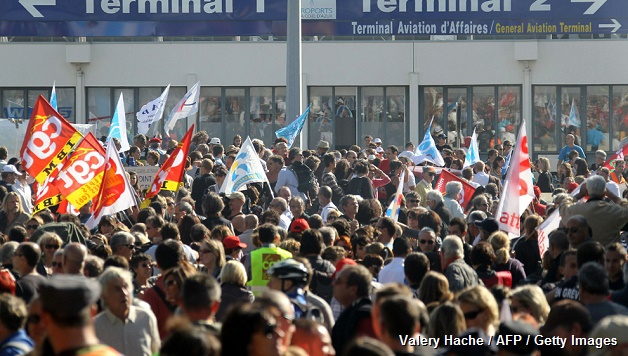 Country after country across Europe has been hit by massive social cuts throughout the past decade – the economic crisis of the past few years has sent the pace of the cuts into overdrive. These are not just a little cut here and there – the individual cuts are coming together to destroy the way of life (living wages, retirement, etc.) expected and enjoyed by many workers in western Europe.

The most recent package of cuts announced in England is a prime example. £84 billion is to be axed between now and April 2015 in the biggest cuts seen in almost 100 years. Five hundred-thousand public sector jobs will be lost at a minimum, and at least 500,000 in the private sector will go as well.

The spending cuts are, as expected, draconian. Various government departments are to lose 20, 25, and even 30% or more of their budgets. Public sector workers will see their jobs devastated, and services that working-class people rely on will disappear. A huge £18 billion is to be slashed from benefits. Housing benefit, social housing, Disability Living Allowance, Child Benefit, and many other benefits are to be torn to pieces.

Similar savage cuts are happening throughout Europe. But these massive attacks on the standard of living of workers are provoking a massive response.

The events witnessed in Greece – including six general strikes this year – have sounded the opening bell of the current round of class struggle in Europe. On September 29, a Europe-wide day of action included mass protests throughout the continent and a general strike in Spain. Portugal is planning a general strike on November 24. Other countries have had massive protests and strikes around issues like education cuts, including Italy, Germany, Austria and others.

The U.S. media likes to present this as though that was the only issue at stake and the only cause for the massive protest wave, but working people in France understand that this is only the tip of the iceberg. French President Nicholas Sarkozy is attempting to use the battle about retirement age to inflict a devastating blow on the workers of France, breaking down resistance to pass further savage cuts in working people’s living standards in the near future.

But working people and youth in France have a recent memory of defeating government attacks through a mass movement when they brought down the CPE (a special labor contract for youth that would have taken away their job security and other rights on the job) in 2006 – even after it had made its way through parliament. It is this confidence combined with the understanding that failure will mean a destruction of their way of life, of being able to make a decent living as a worker, that brought the struggle to a stage where it is crippling the economy.

Over the past weeks, France has been crippled by mass protests, strikes in numerous industries including public transportation and oil, and blockades of ports causing gasoline shortages throughout the country. Quite incredibly, many of these strikes have been organized by the workers themselves without any authorization from the union leadership. Many strikes were declared ”renewable,” meaning they were ongoing strikes with the intent of continuing until this legislation was defeated.

At the height of the movement, more than three and a half million had taken to the streets in 260 towns and cities across the country. This is one-twentieth of the whole population of France.

The current movement in France represents a real social movement – the kind that can topple governments and make real changes in society. One key element of the current situation is the activity of youth and students, with hundreds of schools out on strike – this even though the strike is ostensibly only about the retirement age! On the October 12 day of action, 300 colleges and 400 secondary schools were disrupted by strike action. This struggle has become much broader – anti-cuts, anti-Sarkozy, and against all neo-liberal policies!

Another key element is the broad level of support the strikes are getting. Polls show that 71% of French society supports the strike actions – this despite the gasoline shortage and massive backups in public transportation.

In Marseilles, a police union even attacked the official estimated figure for participation in the demonstration from the police as “false,” while in Paris some police joined the protests. In Rouen, one-eighth of the city was on the streets, the biggest demo since 1995: “a veritable human wave” as described by an activist from Gauche Révolutionnaire (CWI in France) who said “in response to the slogan ‘it is now that we need a renewable general strike,’ a lot of heads were nodding” (socialistworld.net).

However, unlike in past large movements in France – May 1968, for example – in the current situation working people don’t have a vision of an alternative society that they are fighting for. Twenty five percent of young people are in favor of “a revolutionary transformation of society,” yet there is no widespread vision of what this would look like, much less how to achieve it.

Unfortunately, the union leadership is not putting forward a strategy to link up the different movements into a powerful movement to bring down this hated Sarkozy government. At the time of writing, the retirement bill has been rushed through parliament and passed into law. The day of action on October 28 was smaller than previous days of action, yet still featured protests across the country. It is unclear how the student movement will develop.

It is not uncommon for social movements to have their ups and downs, periods of intensification and lulls, and dead periods, followed by newer, bigger flare-ups at another provocation. These powerful struggles mark a new level of radicalism in this present era. To go forward, Gauche Révolutionnaire is calling for the movement to build democratically elected committees of struggle that unify the movements of workers and youth. It calls for these committees to link up nationally to create a leadership that can not only overthrow the right-wing government, but also end capitalism and replace it with a system of democratic socialism.