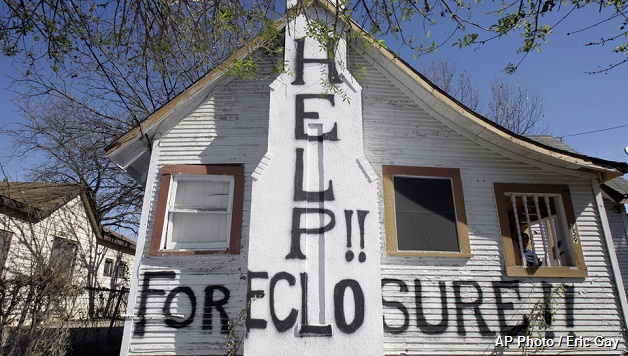 The American Dream of owning a home has become a nightmare for millions of people. In September 2010 a record number of homes were repossessed by banks, totaling 102,134. This is the first time that repossessions have surpassed the 100,000 mark in a single month since the beginning of the economic crisis. Is this what a “recovery” looks like?

While these record-high repossessions have been going on, banks and lenders have been cooking the books to force people out of their homes. Computerized “robo-signers” have been pushing forward the foreclosure process, and bank employees have signed foreclosure affidavits without reviewing documents first. Other foreclosures were also pushed through with missing documents or incorrect information.

These corrupt foreclosures and repossessions are not just a series of mistakes by overzealous bank workers. These policies were designed by the top executives of the big banks with no serious regulation from the government.

The sub-prime mortgage crisis in the U.S. economy is widely recognized as a trigger for starting the recession in the U.S. and the global financial collapse. The housing bubble deflated and then burst through unpaid loans, home foreclosures and debt which affected the financial sector. This wasn’t an accident and wasn’t unpredictable, but is a consequence that is deeply rooted in the capitalist system.

There’s a lot of finger pointing as to who is to blame for the housing crisis. The banks and many media commentators will often charge working people with being too greedy and irresponsible for taking out sub-prime mortgages they could not afford. But how much of this is the responsibility of an individual?

Banks and lenders turning huge profits – super-inflated home prices from 2002 to 2006, leaving many working people unable to afford the high cost. The need to expand credit became unavoidable so that the big banks could continue to make huge profits selling homes even after the bubble had inflated housing prices beyond the means of ordinary home buyers. Then big banks and mortgage lenders (like Fannie Mae and Freddie Mac) made even larger profits by selling bad mortgages with high interest rates. These practices left working people with even higher fees and interest rates on mortgages, leading to foreclosure.

In all, 930,437 homeowners received a foreclosure-related warning between July and September 2010. That actually translates to 1 in 139 U.S. homes! In addition, about 4.4 million households are in “severe default.”

The banks received hundreds of billions of dollars of taxpayer money, yet they refuse to even consider cutting into profits. Obama’s top donors during his presidential campaign were Goldman Sachs, JPMorgan and Citigroup, all of which had a hand in the sub-prime mortgage crisis. This partially explains why Obama opposed a moratorium on home foreclosures and the freezing of mortgage interest rates and voted against an amendment to cap credit card interest rates at 30%, and why he opposes any serious regulation and accountability of the banking industry.

Both Democrats and Republicans are responsible for giving Bank of America $45 billion in bailout money, for example. Even after the bailouts, banks and lenders were looking to make a buck off the misery of homeowners.

We disagree that foreclosures are “inevitable” and that working people must suffer the consequences of a housing and economic system that has failed them. Even with an abundance of housing available, people are being forced onto the streets. They should be allowed to stay in their homes at a rent or mortgage they can afford.

The logic of capitalism places maximizing profits above ensuring safe homes for everyone. If these banks and financial institutions were taken into public ownership, we could call a moratorium on foreclosures and evictions through democratic decision-making.

Quality housing should be a right, not a privilege, from cradle to grave. Community blockades can stop evictions and demand affordable, excellent housing. Instead, bailouts, bonuses, evictions and profits show that the system is not benefiting us, and it’s time to think about how things could be different.