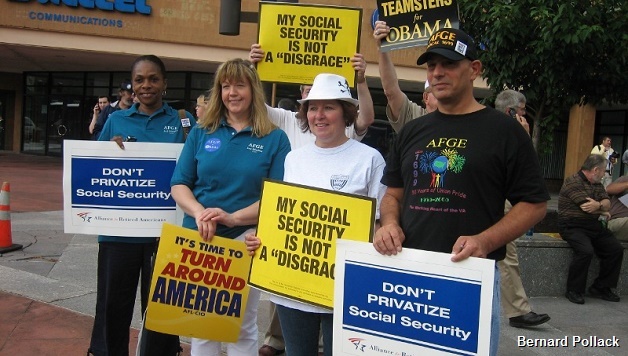 Social Security is in crisis! At least, that’s what big business and their media would lead you to believe. They’re seizing on this manufactured crisis as a pretext to attack the only guaranteed income that enables working people to retire.

In reality, Social Security is expected to be fully funded through 2037, according to system administrators. And the only reason that it’s expected to run a deficit is because of both parties borrowing against a $1.46 trillion surplus to cover persistent budget deficits incurred because of tax cuts for the rich, bailing out the airline industry after September 11, and the wars in Iraq and Afghanistan (ILWU.org).

And even the deficit that’s expected to occur in 2037 could easily be done away with by applying the Social Security tax to all income. Currently, only income up to $106,800 is taxed, letting the rich off the hook for any earnings above that amount.

Social Security is being targeted now because of the massive federal deficit incurred during the Great Recession from bailing out the banks and lower tax receipts, but also 35 years of deficits due to the general decline of U.S. capitalism. Big business wants to continue to make working people pay for this crisis through cutting social programs that benefit us. In their view, over the long term they can’t continue to make handsome profits and afford to pay for social programs.

Part of their opposition is also ideological. They would like to destroy any remnants of government-run social programs, where taxpayer money is redistributed to assist workers or the poor. They want government to function completely in service of corporations and the rich’s economic, military and political needs. But because of the widespread popularity of Social Security, they haven’t yet been able scrap it altogether but have had to chip away at it piecemeal.

At the beginning of his presidency, Obama appointed a bipartisan commission for deficit reduction “stacked with conservative deficit hawks from both parties” (labornotes.org) .Obama handed responsibility to this unelected commission so both parties could shield themselves from the blame for undertaking the massively unpopular task of attacking Social Security. Any belief that this commission didn’t have a set purpose before it was even formed should be dispelled, given that its co-chair, former Republican Senator Alan Simpson, has often publicly argued for scaling back Social Security.

Journalist William Greider accurately described how the commission should be viewed: “When Washington players talk up ‘bipartisan compromise,’ it usually means the people get screwed” (labornotes.org). And, conveniently, the commission is scheduled to report its recommendations on December 1, after the fall elections. This way, the public can’t take its anger out at the polls.

Social Security is massively popular. Any attempt to attack it will provoke public opposition. In a recent AARP poll, 85% were opposed to reducing benefits to pay for the deficit, while 65% think benefits should be increased to cover seniors’ increased cost of living. This is why Obama and both parties are resorting to the commission – it’s merely a cover for the naked attacks they are planning. Word is that the commission will recommend raising the retirement age from the current 67 to as high as 70 and reducing benefits for future retirees.

Big business argues that since life expectancy has risen, people should be able to work until later in life. In reality this would be a disaster for all workers, but for young workers in particular. Older workers delaying retirement several years means fewer jobs opening up for young workers newly entering the job market, who already face the highest unemployment of any age group. This will result in even higher unemployment, both for youth and overall. Raising the retirement age will also be a catastrophe for older workers, especially blue-collar and lower income workers whose life expectancy is shorter. They are often in poor health once they reach 65.

This whole experience vividly displays that Obama and the Democrats, despite their rhetoric, are not friends of ordinary and working people. Obama very clearly stated his intentions to attack Social Security and Medicare even before he took office, that this “would be ‘a central part’ of his administration’s efforts to contain federal spending” (New York Times 9 Jan 2009).

The Democrats have also been complicit in past attacks, voting for Bush’s budgets, wars and airline bailouts, which were partially financed by raiding the Social Security surplus. Due to their role in stealing from Social Security, they also pretend like this surplus never existed and therefore there’s a “crisis.”

Unions and other social movements must be prepared to struggle to defend our public system of retirement. If it’s put off this time around, we must expect that it will come back onto the agenda at some point. Once big business and their politicians announce their determined intentions to attack, unions must be equally resolute in organizing mass struggle to defend Social Security.

Currently, the Sarkozy government in France is trying to force an increase in the retirement age on working people there. This has provoked a major class battle between his government, backed by French big business, and the unions, who’ve opposed the plan through strikes and mass demonstrations involving millions.

Union members and activists in the U.S. should take stock of the events in France. A similar struggle will be needed here once Corporate America and its two parties decide to take the axe to Social Security.