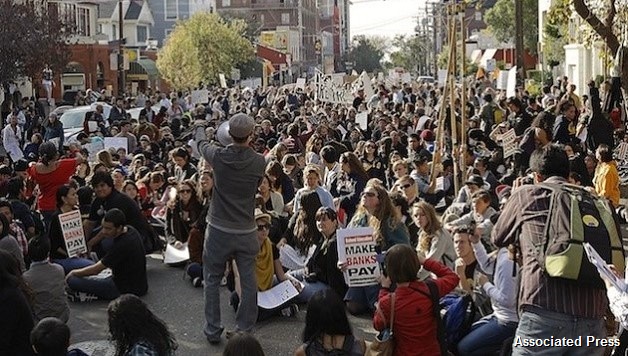 The 2010 mid-term elections mark a new low for America’s corporate dominated two-party system. Most voters went to the polls to vote against hated politicians, but with no enthusiasm for the alternative.

Already, “a plurality (43%) of likely U.S. voters believes that neither Democrats nor Republicans in Congress are the party of the American people,” according to Rasmussen Reports (25 Oct 2010). The poll also found that “38% think Republicans and Democrats are so much alike that an entirely new party is needed to represent the American people.” Unaffiliated voters, who outnumber both Democrats and Republicans, see the need for a new party by a 49% to 41% margin.

These numbers by no means indicate conscious mass support for a clear anti-corporate, pro-worker party. Fox News and other corporate media have presented the right-wing Tea Party as “the alternative.” But polls demonstrate far wider support for a clearly anti-corporate, progressive agenda and the potential mass appeal awaiting the launch of a serious left break from the Democrats.

After two years of broken promises by Obama and Congress, there is a growing feeling that the Democratic Party cannot be a vehicle for progressive social change. Many can see clearly that the Tea Party was capable of growing only because the Democrats pursued a thoroughly business-friendly agenda, which allowed right-wingers to give shape to widespread anti-establishment anger.

Events over the coming year promise to further expose the limits of the two-party system. Democrats and Republicans at all levels of government will continue to preside over rising unemployment, a still expanding foreclosure crisis, school closures, and deepening budget cuts.

After two years of disappointment and betrayals, the attempts of labor leaders and other social movement organizations to mobilize their membership for the mid-term elections met with significant resistance. Without a clear left political alternative, resistance to the Democrats is expressed by non-participation and low voter turnout. This process will only deepen over the next two years.

For millions of workers and young people, the idea that genuine change can be achieved through the Democrats has already been dramatically undermined by the bitter experience of the last two years. At the same time, the idea that fundamental social change is possible on the basis of mass collective struggle, independent of the two big business parties, has yet to take hold beyond a small activist layer. The task of clear-headed activists is now to boldly campaign for these ideas.

In this context, the establishment of a new left party for working people will not happen overnight. It will require bold initiatives by the existing layer of conscious activists. And in the longer term, it will require building a new leadership in the unions and other social movement organizations that clearly understands how to combat the arguments of lesser-evilism and build effective struggles.

Not since the Civil War has progressive social change been the work of either major party. Instead, change has come from mass social movements arising independently and exerting pressure on the ruling class and their two-party system.

For example, under Republican President Nixon we won abortion rights, an end to war in Vietnam, the Environmental Protection Agency, welfare, affirmative action, workplace safety standards and much more. Nixon was no more concerned for peace, women’s rights, or social justice than subsequent administrations, including Clinton when these gains were rolled back, but his administration faced a massive social upheaval, threatening the entire establishment. The Black revolt, the Vietnam antiwar movement, wildcat strike waves and the women’s liberation movement forced Nixon to pass some reforms to avoid a revolutionary challenge to the capitalist system itself.

However, when mass organizations align themselves with the Democrats, they have tended to die as vibrant, grassroots movements. In practice, this support means raising millions of dollars and mobilizing members to back politicians who turn around and implement savage assaults on our living conditions and rights. Rather than fighting for our needs, the logic of “lesser-evilism” forces movements to limit their demands and tactics to the confines of what is acceptable to the Democratic Party, that is big business – the ruling elite whose interests inevitably conflict with the rest of the population.

Support for the Democratic Party has pushed the labor, civil rights, women’s and environmental movements away from the methods of mass struggle (which won real gains) and towards “legitimate” lobbying campaigns and get-out-the-vote efforts – with a corresponding decline of these movements’ power. In this way, the Democrats play an important role for big business by pacifying progressive social movements and neutralizing their power.

Worse still, when “less evil” politicians attack us, many grassroots organizations’ leaders refrain from mobilizing campaigns of resistance or mass protests which risk embarrassing Democrats in power. For example, Obama’s betrayals on health care, the wars, EFCA, bank bailouts and education reform drew only timid responses from the unions and other groups claiming to represent workers and oppressed people. But when Bush implemented fundamentally similar policies, these same leaders frequently supported big protests in opposition.

Rather than a potential vehicle for mass mobilization and democratic political debate, the Democratic Party is a corporate election machine. There are absolutely no democratic structures for regular people or activists to decide the party’s policies. The party conventions are completely stage-managed publicity stunts, with all key decisions made in advance by a small circle of rich donors and top politicians. Liberal groups often promise that a mass movement can transform the Democrats, but history has shown that it’s the mass movements themselves that are transformed.

On every key issue facing our country, the policies of both main parties represent the corporations who finance their campaigns. Workers, women and people of color make up the vast majority of the population and bear the brunt of the Democrats’ and Republicans’ policies, yet we have no party that speaks for us. We urgently need to build a party that stands for the interests of the millions, not the millionaires – a party of workers and young people.

The creation of a mass left-wing party for working people would transform U.S. politics and be an event of world significance. It would give workers the feeling of being part of a class – the working class. Millions would see how they have interests separate from big business on every major issue facing America. The lack of a strong class consciousness has enormously weakened U.S. workers and allowed big business to divide us into “interest groups.”

Big business has systematically used racism, sexism and homophobia to divide workers and drive down living standards and rights. Big business funding of the Tea Party is only the latest example. The formation of a workers’ party would help unite working people across racial and gender divides by demonstrating that our various problems can be solved through solidarity and struggle against big business.

Our goal should not be for a new, or third, version of the existing two top-down “parties.” Instead, we need a genuine political party, providing a forum for democratic political debate, discussion, and education and a vehicle for mobilizing people into struggle.

Rather than being divided and isolated, local community, workplace and social struggles would be strengthened by having a common national political organization to build solidarity and share experiences.

The formation of a mass party for working people would massively shift the balance of class forces in favor of the working class. Desperate to cut across growing support for a new left party, the ruling class would be forced to grant major reforms, putting in the pale past attempts to pressure the Democrats for reforms.

This is how workers in other countries forced through important reforms, including changes to undemocratic electoral laws that hurt smaller parties. Frequently, major reforms have been won without workers’ parties ever coming to power. In Canada, for example, their single-payer health care system was implemented by the Conservatives after a new union-based party was launched around the issue.

From a historic standpoint, the potential has never been greater for the American working class to build its own party. The rottenness of the existing political establishment is clear for all to see. The central obstacles, therefore, are the weakness of the labor and other social movements, the lack of clear-minded leadership, and the low level of consciousness about the way forward. But history also shows that working people learn quickly in periods of crisis, which the coming years will offer in full.

The time to begin laying the foundations for a new party is now. We cannot afford another two years of the Tea Party gaining further ground as the main “opposition” to the political establishment. Socialists and other class-conscious activists need to begin building coalitions on a local level to prepare running independent left candidates, tied to community, anti-war and labor struggles, in the 2012 elections.

Building such embryos for a future mass political alternative will be a crucial tool in campaigning for the unions and other social movement organizations to sever their ties to and funding of the Democratic Party, which is the central strategic task in the struggle for a mass party of the American working class.