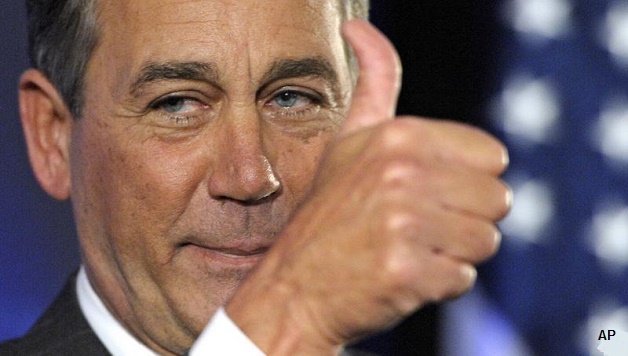 The 2010 elections were the third “wave election” since 2006. They revealed the deepening instability of the two-party system and U.S. capitalism.

The shallow analysis of Fox News and most media pundits is that the sweeping Republican victory and gains for Tea Party candidates demonstrates a swing to the right by the American people and a rejection of Obama’s “left-wing” agenda.

In reality, however, the over-arching feature of the campaign was a bitter anti-incumbent mood. The election was dominated by intense anger and hostility to the political establishment driven by the deepest economic crisis since the 1930s. With the Democrats controlling Congress and the White House, they took the brunt of voters’ rage.

“The millions of Americans voting in midterm elections were not always sure what they wanted… But many knew they were unhappy – uneasy about the economy, frustrated with the direction of the country and dissatisfied with politics” commented the Seattle Times (2 Nov 2010).

Nearly 9 in 10 voters said they were worried about the economy, and the majority said the economy has worsened since Obama was elected. Under Obama working people have seen unemployment rise to 23 million, devastating cuts to public services, and millions of home foreclosures.

Against this background many voters felt anything other than the status quo would be an improvement. A Rasmussen poll found 62% of all voters thought it would be better if most Congressional incumbents were defeated. Only 37% said their local Congressional representative deserved reelection (25 Oct 2010).

The Democrats’ failure to deal with the economic crisis facing working people fueled the popular anger that allowed Republicans and the Tea Party to hypocritically masquerade, with the aid of Fox News, as insurgents challenging the establishment.

The Tea Party has drawn behind it the anger of a section of mainly conservative, older, white, middle-class and working-class people. However, behind the scenes it is financed and manipulated by big-business interests.

Only two years ago Obama and the Democrats were swept to power by tens of millions of workers and young people disgusted with Bush’s pro-war, corporate agenda.

But the huge hopes for progressive change have been dashed. Rather than using their popular mandate to push for bold policies like a massive public works jobs program, raising the minimum wage, and single-payer healthcare, the Democrats focused on the needs of Corporate America.

Immediately after taking office Obama continued Bush’s huge bailout of Wall Street. His stimulus plan helped avoid a depression, but was too timid to create the millions of jobs needed. This has resulted in 60% of the country believing “Obama has paid more attention” to the needs of banks than to “the problems faced by middle-class Americans” (January 2010 CNN poll).

Despite running as a peace candidate, Obama escalated the war in Afghanistan, increased the military budget, and renewed the Patriot Act. Obama’s administration also stepped up deportations and raids against immigrants and defended Don’t Ask, Don’t Tell.

Obama declared single-payer universal healthcare “off the table” from the start, eventually compromised away the public option, and allowed the final bill to become so watered down it actually ended up strengthening the insurance companies at the root of the healthcare crisis.

This is not accidental. The Democrats have always been a big-business party. As Justice warned before Obama’s election, they would inevitably betray and disappoint those who looked to them as an alternative.

This led to a low turnout of Democratic voters in this election, which was decisive in the Republican victory. Exit polls show a major fall in turnout of Democratic voters. Young people aged 18 to 29 were only 10% of voters, down from 18% in 2008. Those over 65 comprised 15% of the vote in 2008 but 24% in 2010. Only a minority of 41% of eligible voters went to the polls, and they were disproportionately wealthier, whiter, older, and more conservative sections of the public.

The 2010 elections demonstrate the complete bankruptcy of the strategy that Democratic leaders argued for over the past two years in response to any demands from the left. We were told that bold pro-worker policies such as single-payer healthcare or public works jobs programs were “unrealistic” because they would alienate moderate swing voters and Republicans. Yet what results do they have to show for their two years of “realism?”

The constant attempts to appease Congressional Republicans failed to win any support from them, but it did succeed in alienating progressive workers and youth who had energetically supported Obama in 2008.

No Mandate for Republican Policies

This election registered more of a vote against the status quo rather than a vote for the Republican or Tea Party agenda.

A NY Times editorial pointed out “Republican leaders say they heard the American people tell them to repeal the ‘monstrosity’ of health care reform, in the words of the likely House speaker, John Boehner. In fact, the American people said no such thing. In polls of Tuesday’s voters, only 18% said health care was the nation’s top issue” (4 Nov 2010).

“The ‘loud message’ to cut spending cited by Mr. Boehner was actually far more muted. The polls showed that 39% of voters say cutting the deficit should be the highest priority of Congress, but a statistically equal 37% prefer spending money to create jobs. Fully a third of those who want to spend money to create jobs were Republicans” (New York Times 4 Nov 2010).

The farce of Republican claims to have a “popular mandate” was further shown by an AFL-CIO exit poll of voters’ opinions on specific Republican policies.

Rather than a growth in support for Republicans, in reality, there is widespread anger at both parties. Former chief strategist for George W. Bush, Matthew Dowd, explained this clearly: “We simultaneously have two political parties who are disliked and distrusted by the voters … We have candidates throughout the country who would be unelectable in any normal election environment…”

“Nevada is a perfect example of this… Both [Democrat Harry] Reid and Republican Sharron Angle are unelectable, but since they are running against each other, someone has to win. And that is true throughout the country, where even though Republicans are disliked as much as Democrats, they will win a majority of the contests because they just so happen to be not in charge. And when the election is over, most of these voters will continue to be dissatisfied and will be looking to take their frustration out again sometime soon in another election” (ABCnews.com 30 Oct 2010).

The 2010 elections were dominated by unprecedented sums of corporate cash. Total spending was approximately $4 billion, according to the Center for Responsive Politics, and 74% of this came from corporations (opensecrets.org)! And both parties, Republicans and Democrats, raked in billions from corporations.

We need to draw the necessary lessons from the experience of the past two years. The interests of workers and young people cannot be represented by either corporate party. The failure of the leaders of the unions – as well as the antiwar, civil rights, environmental and women’s organizations – to provide a serious left challenge and an alternative party to the Democrats has allowed the Tea Party to partially fill the vacuum and tap into the growing discontent in society.

If all this money and energy had instead been directed toward organizing mass rallies for real change, such as single-payer health care, or funding left-wing independent candidates, a real alternative to the Tea Party could have been built.

More than ever we need a left-wing alternative to the two parties of big business. A small but growing minority of workers and youth are beginning to realize this after their experience of Obama and the Democrats in power.

Michael Moore gave an indication of this in a interview with on Democracy Now the day after the election where he warned: “If [Obama] continues this war, if he doesn’t get a hold of Wall Street and wrestle them to the ground… it is not unlikely that there will be a Naderesque-type challenge from the left. And maybe not in the primaries, but actually an independent candidacy.”

With control of the House and a larger minority in the Senate, the Republicans are set to pursue an aggressive right-wing, pro-capitalist agenda. They are demanding Obama extend Bush’s tax cuts for the rich and threatening to cut off funding, if not repeal, the Democrats’ healthcare bill.

Republicans are calling to immediately slash spending for domestic programs by at least 20% – $100 billion in a single year – despite the fact that such measures would seriously aggravate the economic crisis. Big business is also increasingly demanding Social Security be “reformed,” i.e. attacked. There will also be stepped up pressure on unions, immigrants, women and LGBT people.

Obama has unfortunately indicated a renewed willingness to compromise and cut deals with Republicans, especially on privatizing education, “free trade” agreements, global warming legislation, and cutting the deficit. However, given the intransigence of the Republicans, it is likely they will end up clashing with Obama on a number of issues, resulting in a tense gridlock between the Democratic White House and Senate and the Republican House.

Under pressure from the right-wing Tea Party, an emboldened Republican party could over-reach by aggressively pursuing right-wing policies that are out of touch with public opinion.

Bush made this mistake after his narrow electoral victory in 2004 by attempting to partially privatize Social Security. Believing he had a popular mandate, he ended up provoking a backlash. In the face of heated opposition, Bush was forced to abandon his Social Security reforms and was left isolated the rest of his second term. The same fate could await the Tea Party and Republicans.

Although many on the left will be temporarily disappointed by this election, with stepped up attacks coming from the Republicans and big business, a mood will inevitably grow among workers and youth to resist and fight back. The Tea Party itself will likely act as a catalyst for struggle. Already the unions’ October 2 and Jon Stewart’s October 30 rallies brought out hundreds of thousands to Washington, DC to protest the Tea Party and Glenn Beck.

Under the remorseless pressure of the economic downturn, the wars in Afghanistan and Iraq, and the general crises shaking U.S. capitalism, anger and frustration will grow towards both parties, Republican and Democratic, who are now sharing power. Neither party has the luxury of being in opposition anymore. Instead, they will both be increasingly discredited by their record in office.

Marxists view elections as only a distorted snapshot of the public mood at any one moment in time. This mood is not set in stone and can change rapidly under the impact of major events.

In no way did the 2010 election establish the basis for a long-term electoral realignment toward Republican rule. On the contrary, the election was an indication of the highly volatile, explosive period we have entered into. It revealed the growing anger and opposition to the establishment, which is being deepened by the economic crisis.

In only two years the Tea Party emerged out of nowhere, and Obama’s support fell from 78% to 45%. Even more can change in the coming stormy years. Massive upheavals and struggles are on the agenda.

The left will face historic challenges but also many opportunities. We must work to build grassroots movements of workers and young people to resist the right and big business. But for our movements to acquire the necessary unity and cohesion to challenge the consolidated power of big business, we must unite to build a genuine mass left-wing political alternative to the two parties of big business and their crisis-ridden system.