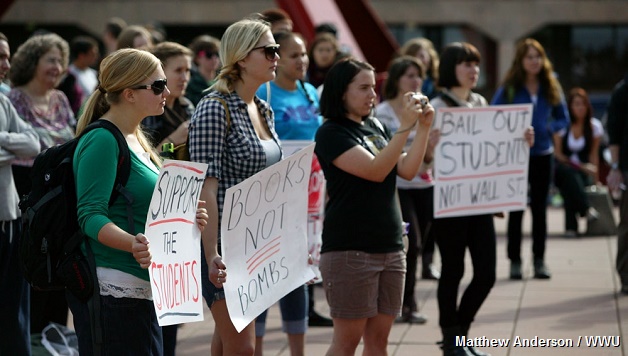 I don’t know if anybody else is frustrated with this, but I am quite frustrated with how fringe ideology has hijacked important issues on campus. Perhaps it’s the lack of involvement by the majority of students in protest when it comes to budget cuts, but I feel that minority groups, specifically Socialist Alternative have hijacked this issue. I showed up to the rally today with reservations, especially since I saw SA had it’s part in the rally. I usually agree position-wise with them, but certainly do not agree with their tactics or presumptions about government. I feel like they are always trying to sell me their ideology, make me join their club, and that these issues are only opportunities for them to do so. What convinced me further of this was some of their members talking about national politics when education is by majority a state issue… was it the State government that bailed out the banks? No so why are you bringing that up? Did the State government send us to war in Iraq and Afghanistan and rack up the defense budget? No, why does this apply to state education budgets? One of the speakers commented about how few people showed up and that everybody else didn’t care about these issues. All of the speakers tried to get people pumped up and angry… but it is so obvious that people are not attracted to this when an ideology is attached. Along with this ideology comes political statements about government officials, which I heard from SA members especially. When I finally realized I had had enough was when the blame of the problem went so far as to WWU administrators and President Bruce Shepard. One speaker I believe specifically said “all they want is your money.”

This aggressive, accusatory approach does not attempt at all to solve any problems. What I did like from what I heard at the rally was from VP for Governmental Affairs Byron Starkey, who told people to get more involved, go to Olympia, and talk to legislators. What I heard from a faculty member, to vote for Initiative 1098, that was constructive. Trying to take down the system, as I suspect is somewhat the goal of SA, is much more costly than working within to change the system. I won’t fight SA on their ideology, though I agree on many points such as that both Republicans and Democrats are failing us, about the wars abroad, and education budget cuts, but I question why more Centralized power on the national scale is a good direction when they link most of these problems I mentioned to that very government. If you are a member of Socialist Alternative, please do respond because I’d love to hear your input. I just feel that the constructive thing to do, to involve as many students on campus as possible would be to place Ideologies and political leanings aside to talk specifically about policy, which is the problem at hand. Had I stayed longer, maybe I would have heard more of this but the above mentioned concerns caused me, like many others, to lose interest.

Socialist Alternative has not “hijacked the issue” of education budget cuts. On the contrary, Socialist Alternative is simply the main organization on campus which is organizing people to rally and fight for a halt to all the education budget cuts. We spent many, many hours hanging up posters, passing out leaflets, and talking with people, organizations, and media outlets to organize this recent rally on October 7th, as well as a similar protest on March 4th, 2010. We are doing everything we can to build a movement involving as many students, faculty, staff, and community members as possible. That is why set up Western United to Defend Education—a coalition of Socialist Alternative, the United Faculty of Washington State, MEChA, Whatcom Peace and Justice Center, Veterans for Peace, Iraq Veterans Against the War, U.S. Senate candidate Bob Burr, and the Alternative Library. That is also why we invited many coalition representatives from a variety of political viewpoints, not just socialists, to speak including Associated Students Vice President for Governmental Affairs, Byron Starkey. We are now making a video and looking into organizing a public forum against the budget cuts, and we hope more people will contact us, get involved, and help with the public forum.

You criticize us for bringing our “fringe political ideology” into the rally against the budget cuts when we critiqued the federal government for spending our tax-dollars on bailing out banks and occupying Iraq and Afghanistan instead of funding education. You argued that education is mostly funded at the state level and, therefore, where the federal government spends our tax-dollars is irrelevant. However, there is no reason that the $708 billion that the federal government spends on the military every year could not be re-directed toward education. The U.S. military occupations of Iraq and Afghanistan cost us over $2 billion/week. For that exact same amount, tuition for every U.S. higher education student could be eliminated for an entire year.

Education may be currently funded primarily at the state level, but if education is a priority, then the federal government needs to invest much more funding into education. In fact, they should make college free for everyone like reformist socialist governments have done in many countries. Apparently, education is not as much of a priority to the Republican and Democratic Party as U.S. military/corporate domination of the oil-rich Middle East. This is one example why it is impossible to separate education funding from politics.

Furthermore, Washington State does not operate in a vacuum, and we cannot understand why these education budget cuts are happening to us locally without looking at the causes nationally. We must bring to light capitalism’s role in causing this global economic crisis two years ago which is what caused the state’s budget deficit in the first place because people in Washington now have less to spend, and Washington State is collecting less taxes.

It was the bankers and financial investors who made extremely risky investments in sub-prime housing mortgages and the stock market that caused the global financial system to collapse in 2008. In order to prevent the entire global economy from going down with the banks that were collapsing, the federal government pledged the banks over $7 trillion in bailouts and guarantees, paid for by the tax-payers — by you and me.

If the bankers and investors who created this economic crisis can get bailed out by our tax dollars when they wreck the economy, and the top executives of these firms still receive billions of dollars in lavish salaries and bonuses, then why is it not possible for the government to come up with a tiny fraction of that $7 trillion to bail out a state, schools, and jobs?

It wasn’t the students, teachers, and staff who created this economic crisis; it was the bankers and investors. So why should we allow the federal and state government to balance the budget on our backs? Why should we allow the government and campus administrators to cut 14 -26 academic programs at WWU this year, raise our tuition $670/year, slash our financial aid, and eliminate the jobs of teachers and staff? All of these budget cuts will only further aggravate the downward economic spiral. So calling for a federal bailout for Washington State and the social programs of our state makes sense.

These are not fringe ideological positions. The vast majority of Americans agree with us that the government should spend money on education and jobs, not war and bank bailouts.

We have contacted our state legislators year after year and urged them not to cut the education budget, and unfortunately that political ideology/strategy has failed. This is the third year in a row now where the state has cut the budget of WWU and higher education despite many students, faculty, and staff urging them not to. After 3 years, it is clear that if lobbying Republican and Democratic legislators is at the center of our political strategy, then our movement will be doomed to fail. History provides many lessons of people’s movements, such as the labor, civil rights, and gay rights movements, that won their rights not when those movements simply brought to light the second-class treatment they were receiving, but instead took to the streets in rallies, protests and marches to demand their rights, to fight for their rights, and to take their rights for themselves.

As the famous abolitionist Frederick Douglass said so eloquently, “If there is no struggle, there is no progress. Those who profess to favor freedom and yet depreciate agitation…want crops without plowing up the ground, they want rain without thunder and lightening. They want the ocean without the awful roar of its many waters…. Power concedes nothing without a demand. It never did, and it never will.”

Socialists will fight for every reform possible within the capitalist system that improves the lives of ordinary people. That is why, for example, we asked the president of the United Faculty of Washington State to speak at the rally about why people should vote for WA Ballot Initiative-1098 which would establish an income tax on the wealthiest 1% and direct those tax revenues toward education and healthcare.

While socialists will fight for every progressive reform like this, we ultimately need to educate and organize the working class to establish a new political economic system where a wealthy elite cannot live a life of lavish luxury at the expense of an increasingly exploited, indebted working class.

Should we not put forth these views — which would benefit the vast majority of the population — because the majority of ordinary Americans do not currently identify as socialists? To cease talking about democratic socialism as a solution to the multitude of problems we face today would get us nowhere because these problems, such as the education budget cuts, cannot be solved with any permanence under capitalism which is an inherently unequal system wracked by economic crises. Even if socialist views on politics are currently a minority viewpoint, should our status as a minority restrain us from expressing our views on the causes and solutions to problems such as the education budget cuts? We feel it is our duty to not only campaign against the education budget cuts but also discuss with people the root causes of these problems and real solutions and build a socialist organization and a movement that can stop the education budget cuts and ultimately end the capitalist system that causes the budget cuts as well as economic crises, unemployment, rising debt, war, and environmental degradation.