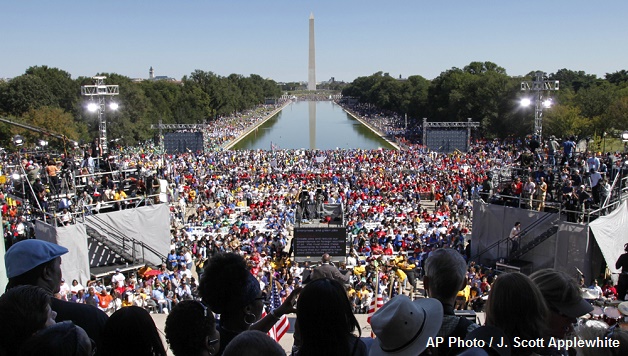 On Saturday Oct 2, tens of thousands gathered at the Lincoln memorial as part of the “One Nation” rally for jobs and education. Organizers estimated that over 175,000 attended. The rally was pulled together by broad coalition of over 400 unions, civil rights groups and progressive organizations. The turnout came overwhelmingly from the labor movement.

With no economic recovery in sight for working people, this historic demonstration came at an important moment. It had been twenty years since the labor movement and other progressive organization came together and mobilized in the capitol.

Though the “One Nation” rally was called long before Glen Beck’s rally in D.C. a month earlier, it was in part a response to the right and an “antidote” to the Tea Party. Most ordinary working people want jobs, education and health care and do not buy into the ultra-conservative views put forward by Beck, Sarah Palin, and their Tea Party followers.

Many of those who participated in Saturday’s event wondered if their rally would receive the same media attention that Beck’s “Restoring Honor” received. It did not. Glen Beck and the Tea Party get media attention because they are backed by a section of big business and Fox News.

But the corporate media has no interest in favorable coverage of the One Nation rally because employers don’t like unions. Nearly twice as many attended October second as attended the Glenn Beck rally, yet Beck gets exponentially more media coverage. The diffuse Tea Party crowd, no matter how angry their talk, cannot threaten the profits of big business. Unions, organizing workers for better wages and benefits, are a threat to corporations that make boatloads of money by driving down wages and cutting benefits.

With real unemployment figures creeping towards 20% and social services being slashed, this mass protest should be welcomed. History shows that we will only get good jobs and services if we fight for them. The labor movement and the civil rights movement were built through protest actions from below designed to achieve victories to improve our day-to-day lives. Mass action helps people feel their strength, exchange ideas, rally around a demand and build organization for future struggles.

However, from many of the organizers’ perspective it was a rally to energize their base to go out and again vote Democrat. “Today we march, tomorrow we vote,” were the words of Jesse Jackson from the podium. Many in the official leadership wanted to mobilize because of the lack of enthusiasm for the Democrats and deep disappointment felt after two years in office with continued economic crisis and little results.

The Democratic Party will not provide solutions because they are bought, sold and paid for by the corporations. The labor movement cannot win this fight against corporate greed and economic crisis, possibly the fight for our lives, if we remain fighting with one hand tied behind our backs by the Democratic Party. Yet speaker after speaker implored the crowd to vote for a party of the same Wall Street interests that are laying off, cutting budgets and waging wars.

Also, we needed a mass march from the labor movement to push for the Employee Free Choice Act in early 2009. Better yet, during the health care debate, union leaderships should’ve called for a mass campaign for single-payer health care as a step forward for working people. Instead, despite the call for free, quality health care for all (without insurance companies) being extremely popular in polls, the idea never entered the debate in the halls of power or the media. This would’ve been different had their been single-payer rallies at town hall meetings combined with a march on Washington and a door-knocking campaign.

Despite the weakness of the event, Socialist Alternative actively participated in the rally while still not supporting the call to vote Democrat. We rallied supporting the demands for jobs and education while also engaging with the crowd and arguing that the way to achieve our demands is through independent struggle and political action.

Many of the workers there were from public sector unions facing extreme budget cuts; oftentimes, the ones doing the cutting are Democratic Party politicians. We felt that there would be openness to discussing a break from both corporate parties, and we were right! Socialist Alternative produced a new pamphlet called Challenging the Two-Party System: Can a left alternative be built and our members sold 170 copies. We also sold over 400 copies of our newspaper Justice and raised just shy of $1,000 from sales of literature and buttons.

The highlight of our efforts was the 12-foot banner which read “Wall St. Has Two Parties, We Need One of Our Own.” The huge banner also read “Fund Jobs and Education Not War and Wall Street,” linking our strategy to win jobs to independent politics. This attracted a lot of attention. People took pictures, commented and approached our table to discuss with us and purchase our literature. Socialist Alternative also endorsed and participated in the socialist contingent feeder march (organized by U.S. Senate candidate from Ohio, Dan La Botz) to help broadly popularize the ideas of socialism.

Through our discussion and distribution of material it was clear that thousands of working people are deeply disillusioned with the Democrats and the two-party system. Workers were in D.C. by the droves to support their union or organization and the demands but not necessarily the call by the official organizers to vote Democrat. Overall, our members felt that the day’s event represented encouraging signs about the potential to build the workers’ movement.

At the same time, despite the efforts of the leadership to energize the base to get to the polls, the Democrats will undoubtedly be punished in the elections for failing to deliver. The Republicans and even some Tea Party candidate are likely to make gains, and this will be seen by millions as a set back and lead, at least temporarily, to demoralization.

However, the anger amongst working people will not subside. Anger can only grow as mass unemployment continues, the economic crisis deepens and the corporate establishment fails to provide any real solutions. The event revealed this frustration and a willingness to consider alternatives which could be tapped into if the leadership was prepared—or more likely pressured from below—to build and independent struggle.

Early 2011 could become a big season of discontent. More cuts and coming, and more ordinary workers are demanding that we get organized to fight back. Looming is a potential bipartisan attack on social security. Meanwhile, big business intends to further dismantle the public education system. The October second event could have laid the basis for a struggle against the assault on our living standards by capitalism.

A coalition of workers’ organizations and community groups needs to be built from below. We need united mass actions by all unions and the public affected by budget cuts. Services could be funded by cutting the war budget, reversing the bailouts and taxing the super-rich and the corporations. If businesses are laying off workers, then they should be taken into public ownership under democratic workers’ control.

Coalitions against cuts and layoffs could build mass support by holding educational events, linking up with workers in struggle, having mass democratic meetings to decide demands and building actions to win victories. The socialist vision and class struggle approach that built the labor movement in the first place needs to be reborn with an emphasis on independent political action.

The formation of a workers’ party in this country would not only provide a poll of attraction for workers and youth looking for a way to defend their interests, but it could also become a forum for real discussion and debate about the need for more fundamental change to lift all working people, the poor and society as a whole out of the dark crisis of global capitalism.