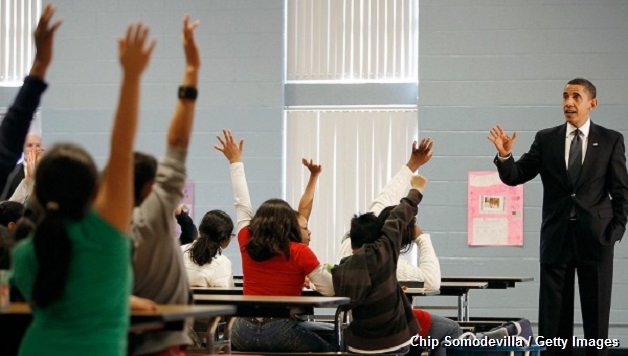 With 46 states facing budget shortfalls this year, public education is facing major cuts across the country.

Thousands of teachers are losing their jobs  not because there is no need for them, but because of budget cuts. Cuts and teacher layoffs lead to larger class sizes, and cutting programs like art, music and sports, thus damaging the quality of education. In Chicago and in many other cities and towns teachers are being urged to forego raises or face increased class size.

This is a false choice. The money exists to pay for lower class sizes and give teachers decent pay. Congress has written a blank check for the disastrous occupation of Afghanistan, but it only agreed after much delay to provide inadequate stop-gap funding for the states that will temporarily prevent even deeper cuts.

Since the passage of Bush’s No Child Left Behind (NCLB) education reform in 2001, standardized tests have become the basis for “high-stakes” decisions like school funding and closing “failing” schools. In the name of ”raising standards” and “holding teachers accountable”, standardized tests are increasingly becoming the only way of judging teachers’ and schools’ success.

While ”raising standards” sounds like a laudable goal, the reality of these high-stakes standardized tests paints a very different picture. Making everything ride on annual tests in math and reading leads to trimming down other subjects. And even in the evaluated subjects, the teaching is changed to focus almost exclusively on raising test scores  to the detriment of teachers’ creativity and the interests of the students.

More and more, parents, teachers and civil rights activists are seeing Obama’s policies as a continuation of Bush’s NCLB. Obama, like Bush before him, likes to blame ”bad” teachers and teachers’ unions for the poor state of education. This is an attempt by the bosses and their politicians, including Obama, to divert blame for the destruction of the young people’s futures – particularly the wholesale destruction of jobs – by their system. Everyone who has been in school knows that some teachers are more skilled than others. Nevertheless, the quality of schools is determined far more by the wealth of the community than the skills of teachers. By heaping blame on teachers, the bosses seek to divide us when we should be uniting to defend and improve public education.

Obama, like Bush and Clinton, likes to present charter schools as the answer to the problems of education. There are charter schools that perform well and those that don’t. But by removing many of the more motivated students and parents from the public schools, they are guaranteeing that the remaining public schools – especially in inner cities, where the charters proliferate – will go from bad to worse.

Currently, charters are part of a broader plan to privatize large elements of public education. This will deepen the divide between those who get a high-quality education and those who don’t. And the dividing lines will be based on class, race and income. From the point of view of the ruling elite, a large number of working people only need basic reading, writing, and mathematics skills, and to learn discipline and punctuality. Especially with the proliferation of service sector jobs, the elite have concluded they do not need a highly educated workforce for the majority of jobs.

This has led to the continual under-funding of public education in the U.S. and put it in the sad state it is in today. At the same time college tuition is skyrocketing, making it unaffordable and increasingly inaccessible to a large number of working-class young people.

Students don’t have to take this lying down! In New Jersey last spring, tens of thousands of students from across the state walked out of their classes to protest $820 million in education budget cuts. This protest had been mainly built through Facebook by the students themselves, with one student starting a page for the event and 17,000 people joining it. Other student protests have taken place in other states, including California, around both higher ed and K-12 issues.

The speed with which the New Jersey protests were built shows the possibilities for building the fight-back when there is a mood of mass anger. We urgently need to step up the fight-back. The planned national mobilization on October 7 to defend higher education should be a rallying point for our struggles.

In the end, however, it will take more than a few protests – no matter how large and inspiring – to stop the budget cuts to education and prevent teacher layoffs. We need to build real coalitions of teachers, parents and students across the country. The teachers unions can play an important role in this.

Recent events in Chicago show the way forward. Students, parents and teachers united to build a coalition that was able to successfully stop some school closings. Out of this struggle, a more fighting leadership, CORE, was elected to head up the Chicago Teachers Union. This new leadership plans to carry on the struggle against school closings and other attacks on education. Their struggle can serve as an example to other cities on how to fight back.