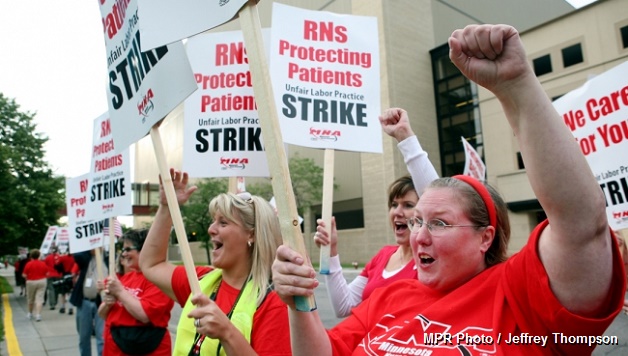 In the largest nurses’ strike in U.S. history, 12,000 walked out of 14 Twin Cities (Minnesota) hospitals on June 10th, and are set to strike again. Prepared by months of big informational pickets, billboard ads, and internal organizing, the 24 hour strike was solid. The chants on the large and lively picket lines were frequently drowned out by honking cars showing the broad public support.

Still the hospitals are refusing to budge. Thousands of nurses responded on June 21st with a strong vote of 84% for an open ended strike. Minnesota Nurses Association spokesperson John Nemo expressed nurses’ frustration: “The hospitals forced us to a one-day strike. We did that. The hospitals say nothing’s changed. We feel they are forcing us to an open-ended strike.”

MNA is demanding clear numeric nurse-to-patient ratios to protect patient safety, but the hospitals refuse to even talk about staffing ratios. Highlighting the goals of the hospital industry, David Wessner, CEO of Park Nicollet hospital, said “there is probably no other industry that is in such need of the Toyota production system.” Designed to maximize profits, this assembly line treatment of nurses endangers patient care and leads to burnout and turnover of skilled nurses.

Management also proposed to slash nurses’ pensions by 33 percent, eliminate health coverage for part-time nurses, and increase health care premiums while demanding the ability to change nurses’ plans anytime they choose, without input from the union.

This is despite the 14 hospitals making over $750 million in profits last year plus fat bonuses for top executives. Moreover, they’ve spent hundreds of millions on new facilities and fancy renovations. “If patients could pick between highly skilled nurses and the piano in the lobby and the waterfall, I think they’d pick the nurse,” said veteran nurse Mary Scatarelli (startribune.com 14 June 2010).

The Minnesota strike is the current flashpoint in a rolling national struggle between healthcare workers and the industry bosses. In fact, 13,000 California nurses would have also struck on June 10th if a pro-business judge hadn’t issued on injunction barring strike action until September 30th, when their contract officially expires.

Like other industries, for-profit healthcare companies are using the economic crisis as an excuse to squeeze more profits out of working people. The only difference is, while most unions and un-organized workers are getting rolled over by the corporate juggernaut, the newly formed National Nurses United is fighting back… and winning! (See coverage of the Temple nurses strike at SocialistAlternative.org).

This will be the largest and potentially most important strike since the economic crisis began. A big victory could encourage more workers to stand up and pressure other union leaders to get their act together. A defeat, however, could reinforce the idea that workers are powerless to stop the business agenda.

Winning an open ended strike will require staying out as long as possible with maximum participation from nurses. The hospitals must spend thousands a day on each scab nurse, and they cannot bleed money indefinitely. But the union is only as strong as its weakest links; if the strike drags on and some nurses give up and go back to work, the strike will be hard to sustain.

For this reason, mobilizing public support and actions that increase nurses’ morale and fighting spirit are needed. Socialist Alternative will do all we can to build solidarity for this potential strike.