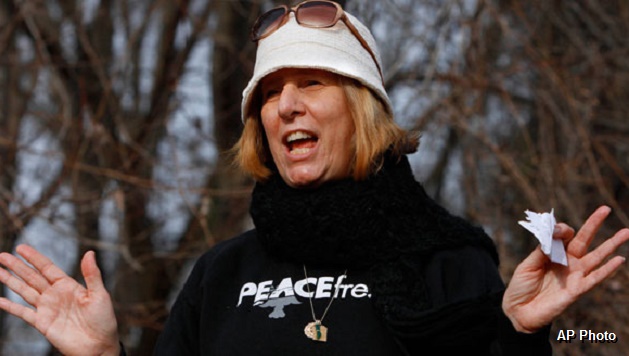 Cindy Sheehan came to prominence in 2005 when she set up a protest camp outside of President Bush’s ranch, waiting to ask him simply why he had to send her son to die in Iraq. In 2008 she ran for Congress as an Independent against the top Democrat Nancy Pelosi, winning an impressive 16% of the vote, beating the Republican, and coming in second place.

Sheehan’s statements below identify capitalism as the root cause of the world’s problems and democratic socialism as the alternative. This comes at a time when a growing number of Americans are questioning capitalism as we suffer through the deepest economic crisis since the Great Depression. According to a 2010 Gallup poll, the percentage of Americans who think socialism is superior to capitalism has shot up to 37%.

Cindy’s comments below underline the burning need to break from the Democratic Party and build an independent party of millions of working people that will stand up to the banks, Big Oil and insurance companies. She also expresses interest in possibly running for President in 2012 as an Independent. These positive developments highlight the need for left-wing forces to run independent candidates in the 2010 elections and begin discussing and laying the basis for mounting the strongest possible independent challenge in the 2012 elections as well.

What are your thoughts on Obama’s foreign and domestic policies? Has he fulfilled his promise to end the big-business politics of the Bush era?

Iraq laid in shambles in January 2009 when Obama took office. The neighborhoods had been ethnically cleansed after over one million people had been killed and about five million internally and externally displaced. During his campaign Obama promised over and over that the “first” thing that he would do as President would be to set a strict timetable of withdrawal from Iraq—which hasn’t happened 16 months into the new regime. And remember, Obama also promised that all “combat troops” would be out of Iraq in 16 months.

Obama’s rhetoric appalled me when he would say: “I am not against war—just dumb wars like Iraq.” The peace base of the Democratic Party either didn’t hear what he said during his interminably long campaign, didn’t care, or refused to listen.

2009 turned out to be the worst year for civilian and U.S. deaths in the (by that time) eight-year-old war in Afghanistan. Obama has tripled Bush’s commitment and has requested two emergency supplemental funding bills (one still needs the House’s rubber stamp), which he also promised would not happen if he was elected. This not even mentioning the tripling of drone attacks in Northern Pakistan.

As far as Obama’s domestic policies, he stuffed his economic team with neo-liberal elites like Timothy Geithner, Scary Larry Summers, Robert Rubin, and Ben Bernanke, the financial institutions are still receiving their bailouts, and the unemployment rate stands at 9.9% (officially acknowledged). The health care “reform” legislation was no more than a give-away to private insurance companies. Far from being “Socialist,” Obama’s policies of corporate welfare are stealing from what’s left for the working class in this country.

Democratic apologists always claim that we must elect Democrats because, if we don’t, then the Supreme Court may veer more to the right. Well, Obama’s first Supreme Court appointment was a centrist to say the least, and his second appointment is a woman who is for giving the Executive Branch more power and leans noticeably to the right.

What was your personal experience with Democratic Party leaders when you emerged as a key figure in the antiwar movement in 2005? How did they respond to your demand to end the Iraq war after they took control of Congress in 2006?

I met with dozens of Democratic Senators (Obama, Clinton, Levin, Reid, Kerry, etc.) and House Reps (Pelosi, etc.), and they all told me: “Cindy, if you help us regain the majority in Congress, we will help you end the wars.”

Well, after August of 2005 when anti-war sentiment and anti-Bush sentiment was at its peak, the Democrats used that energy precisely to regain slim majorities in both Houses. But what did they do with those majorities? Funded the wars, refused to hold the Bush crime syndicate accountable, passed the FISA Modernization Act and bankster bailouts, among other things.

After the first war supplemental was passed in May of 2007 (with organizations such as MoveOn.org cheerleading for the bill’s passage), I left the party for good.

To answer your question about how the Democratic Party responded to demands to end the wars—well, the wars are still raging, and now there is a Democratic Tyranny in the House, Senate, and Executive Branch.

U.S. public opposition to the war in Afghanistan has risen in recent years, and a solid majority still opposes the Iraq war. Yet the antiwar movement is in crisis, and protests are quite small. What do you think is going on?

In 2008, the 5th anniversary of the invasion of Afghanistan, antiwar organizations in the movement said that a mass demonstration in DC would “embarrass the Democrats,” who were, at that time, fighting for the presidency and a larger Congressional majority. The institutional anti-war movement—which I call the Peace Industrial Complex—is almost as tied to the Democratic Party as organized labor is.

We had anti-war leadership (not me) support and campaign for Barack Obama—now these organizations are finally starting to, maybe perhaps, see that he is not better than Bush. But I guarantee you, in 2012, they will be out there stumping for him again.

You ran against Democratic Speaker of the House Nancy Pelosi in 2008, beating the Republican, and winning an impressive 16% of the vote. Can you tell us about your experience as an independent antiwar candidate?

This answer to this question could fill a book, but it comes down to a few things:
The federal electoral system, the way it is, cannot be beaten at its own game. The rules and regulations make it practically impossible for a third party/independent candidate to even get on the ballot, let alone run.

A candidate cannot get paid by the campaign unless he/she is an official candidate, and one can’t run for office and have a day job. So I went for about 10 months with very little income, and my one credit card got charged up to the max and is now in collection.

I thought that running against Pelosi would be a great way to expose the issues and the corruption of the “two” party system, but the media totally shut me out.

It was one of the worst experiences of my life, but people around the country really stepped up to the plate and donated money and time, and we had a really honest, dedicated, principled campaign. I certainly can hold my head up high.

Do you think it’s time to build a political party independent from the Republicans and Democrats? Would you consider running for President to provide an independent left-wing, pro-worker alternative in the 2012 election?

I thought it was time long ago, but the mood of the country really seems anti-establishment now, but I see most of that energy being stolen by the right wing.

Yes, if I am promised a professional campaign staff, and we get started immediately.

What is your view of the Green Party?

I love the party’s principles, but it seems many times (and many Greens do agree with me) that the party has been overrun or infiltrated by Democrats who want to discredit the party or pull it to the right.

You have written two editions of your book about the “20 Greatest Myths of the Robber Class and the Case for Revolution.” Why do you say we need a revolution?

Because I don’t think the system can be reformed. The capitalist class (which I call the Robber Class) has gained profound control of every aspect of our society, and the U.S. has the greatest income gap between the rich and the poor of any so-called first world nation. My revolution is a working-class (Robbed Class) revolution that begins from the ground up to retake the power and more fairly distribute the nation’s wealth and resources.

I believe that the wealth and resources of a region/nation belong to the people. I think industry should be in the democratic control of the workers.

And I think ordinary people have a gut feeling that this is the only fair way to operate. Many people have lost their jobs, homes, and any kind of security that they had, and they see that the rich are getting richer, while the poor get poorer. I think the greatest advantage of having a high-profile Socialist presidential campaign is that we can educate people that they aren’t alone and that they are not lazy or the problem. The problem is simply Capitalism—not “crony Capitalism” or “predatory Capitalism,” because Capitalism is inherently crony and predatory. The only goal is profit at any and all costs.

So you see capitalism as the root cause of society’s problems – but what is the alternative? Democratic socialism?

You have begun reading My Life by Leon Trotsky, a central leader of the 1917 working-class revolution in Russia and the struggle against the Stalinist dictatorship that developed after the revolution. What do you think of Trotsky?

I have only read the first part of the book, but so far I am finding Trotsky a very engaging and entertaining writer who obviously had an uncommon intellect, and I’m looking forward to getting to the part about the political struggles.

Check out the excellent interview with Cindy Sheehan during the middle of her 2008 campaign when she ran as an Independent against the Democratic Speaker of the House Nancy Pelosi.