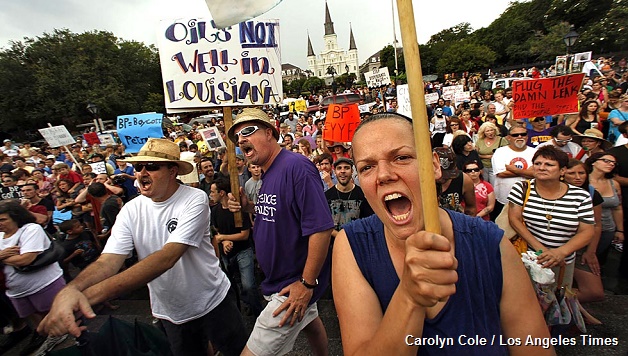 On March 30 of this year, the New York Times reported “the Obama administration is proposing to open vast expanses of water along the Atlantic coastline, the eastern Gulf of Mexico and the north coast of Alaska to oil and natural gas drilling, much of it for the first time.” Three weeks later, disaster hit Deepwater Horizon.

Obama’s plans to drastically expand offshore drilling may have been thwarted, but government permits were granted by the Obama administration for new drilling as late as a month after the spill.

While BP has done everything to try to clean an image slathered in slimy oil, they have handled the actual cleanup of the Gulf with far from the sense of urgency needed. Instead of seizing BP’s assets in the gulf and using them for the cleanup, the Obama administration has let BP handle the failed stop-gap attempts to alleviate the damage. BP has used a toxic dispersant in their botched cleanup, and they are funneling thousands of barrels of spilled oil onto the world market.

Despite a few tough words from Obama, the White House has done very little. In addition, Obama’s energy policy beyond this spill is inadequate at best. President Obama touted the benefits of coal and nuclear energy on the campaign trail; it should come as no surprise that he received big campaign contributions from executives and big shareholders tied to these companies (opensecrets.org).

This administration has taken its advisors from the big corporations that dominate the key industries. Matt Taibbi writes: “President Obama has packed his economic team with Wall Street insiders intent on turning the bailout into an all-out giveaway… Obama gave key economic positions in the White House to the very people who caused the economic crisis in the first place.”

Nuclear energy is no alternative. The environmental effects of a nuclear disaster wouldn’t be measured in years but millennia. Even short of disaster, toxic dumping and uranium exposure have resulted in increased cancer rates and other health problems for populations exposed to uranium, from Puerto Rico to Iraq (Yes Magazine 13 March 2003).

Internationally, the Obama administration has been a barrier to sufficiently addressing climate change as the U.S. blocked any meaningful agreement from being reached at last year’s summit in Copenhagen. As the summit approached last December, Scientific American ran a striking cover story titled “A Plan for a Sustainable Future.” This showed how wind, water, and solar power could supply the entire world’s energy needs by 2030. Citing the massive rapid shift in production during World War Two, the study shows the possibility for a better world. Yet, there are no advocates for it in Washington.

A massive increase in solar, wind power, and public transportation would both provide jobs and environmental benefits. However, these projects wouldn’t be as profitable to big business as oil, cars, gas, coal, or nuclear power. To get green jobs, we need to fight for them rather than depend on politicians or business plans. A mass campaign for green jobs could unite union members, community groups, and environmental activists; in order to take on the behemoth energy industry, the movement would need to run candidates, as well.