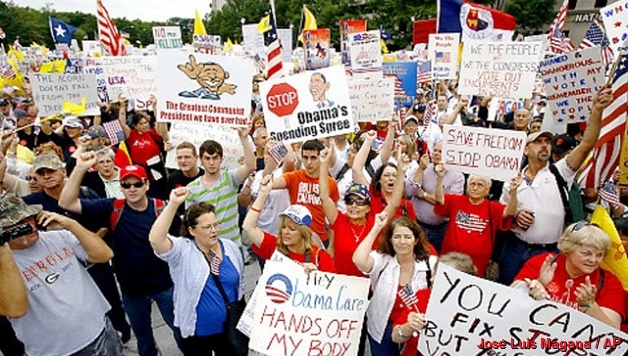 The right-wing populist, anti-government, anti-Obama Tea Party movement has kept making headlines over the past year. Tea party activists have been influential in the Republican Party’s drive to try to make gains in the 2010 mid-term elections. An April New York Times/ABC poll showed 18% of the population identifying themselves as “supporters” of the Tea Party.

Increasingly, Republican candidates and leaders have to heed the commands of right-wing hacks like Glenn Beck, Sean Hannity and Rush Limbaugh. No lesser light than Newt Gingrich said that he hoped the Tea Party would become the “militant wing” of the Republican Party. The meteoric rise of the Tea Party movement caused serious concern among the liberal commentators like Paul Krugman that the country was moving sharply to the right.

A June Washington Post/ABC News poll indicated a sharp decline in the support for the Tea Party movement right especially among young people from 18 to 29-with 60% having a negative view. This is a sharp decline since March when the same group had a 43% positive view and 38% negative.

Without question, the environmental catastrophe in the Gulf which put on display the effects of deregulation and rampant corporate profiteering at the expense of people and the environment had a big effect in reminding people that behind the demands for “freedom” and against “big government” by the Tea Party populists are corporate America and Wall Street.

Also, in the June primary elections, the Tea Party supporters’ ideas came under closer scrutiny. This was especially the case with right-wing libertarian Rand Paul in the Kentucky Republican Senate primary. Rand said that he “did not support all of the 1964 Civil Rights Act” and that Obama’s pressure on the criminals who run BP was “un-American,” presumably because it criticized their “right” to destroy the ocean in the name of profit.

In Nevada, the Tea Party darling and GOP Senate candidate Sharron Angle called for abolishing the Department of Education, the EPA and the Department of Energy, and privatizing Social Security. Despite increasing its influence among the right-wing base of the Republican Party in some parts of the country, the Tea Party is already triggering a reaction as its ideas and program come under scrutiny. This is increases the contradictions and divisions in the Republican Party as they attempt to regain the Senate and the House in the 2012 elections.

The failure of the Obama administration and the corporate Democratic Party to deliver any substantial reforms on healthcare, jobs, the environment and his continuation of the war policies in Afghanistan and Iraq have created a political vacuum. Wall Street and the banks continue to feast with the bailout money and zero interest government loans for speculation and profiteering. The recovery so far is a recovery for the millionaires.

For working people, wages have continued to stagnate or decline, real unemployment remains at 18%, millions are losing their homes or are at risk of foreclosure and an estimated 50 million people are officially in poverty. The left and the union movement have failed to provide an alternative that could mobilize the anger and frustration into a campaign to fight for jobs, a living wage for all, rebuiliding the infrastructure, taxing the rich and big business, and a national plan for green technologies.

The corporate media presented the anger that fueled the Tea Party’s surge in the polls as the result of mass opposition to “universal healthcare,” “big government,” and “socialism” in the US. In the absence of a clear alternative from the left, the anger and insecurity among large sections of the population due to the economic crisis found a partial expression through the right-wing mobilizations which started last summer during the healthcare debate but soon expanded to large anti-Obama and anti-immigrant rallies and campaigns. The early “astroturf” mobilizations were largely an effort by the private insurance companies, the Republican Party and Fox News to mobilize whatever right-wing forces they could to block any attempt to reform healthcare and to challenge Obama.

The Tea Party movement, a broad, inchoate coalition of individuals and interest groups ranging from libertarians to conservatives to rightwing extremists, extreme Constitionalists and open racists, sprung up grassroots chapters across the country.

Their mantra continues to be about limited government and veneration of the “original intent” of the Constitution and against taxes and bailouts. The Tea Party’s core support tends to be conservative males over 45, mostly suburban, many small-business owners, a demographic group that has been battered by the economic crisis and cultural shifts of the past period. However, it found an echo among a section of older white workers who thought that the Tea Party movement represented a genuine opposition.

Among the Tea Party leaders are right-wing populist demagogues like Rand Paul, Sarah Palin, anti-immigrant Tom Tancredo, former House Majority leader and flat tax advocate Dick Armey, former House Speaker Newt Gingrich, and Texas governor Rick Perry. Behind the “grassroots movement” are lurking the corporate-funded, right-wing neoconservative lobbying groups like Freedom Works, Americans for Prosperity and the propaganda machine of Rupert Murdoch’s Fox News Network. According to the New York Times, Wall Street is in “a state of bitter, seething, hysterical fury” against even the most modest attempts to reign in the deregulation, profiteering and even the slightest increases in taxes for the rich.

The reactionary ideas and policies that are advocated by the Tea Party movement are in reality far from popular with the public. When the Tea party’s pro-corporate ideology and candidates are presented in their true colors, they do not garner significant support. Unless a working class alternative is urgently built, the real anger can be channeled and exploited by corporate interests in the form of a resurgent right wing populism that will be speaking about “freedom” and “individual rights.”

Even though the Fox News and other corporate mass media would have you believe that the country was moving to the right (because of Fox News and the huge media coverage of the Tea Party), there is mounting evidence that the opposite is true. An April 2010 poll conducted by Pew found widespread skepticism about capitalism and increasing support for “socialism,” especially among young people. Defying the corporate and liberal wisdom that the US is a “conservative” country, the poll found that almost 50% of the people asked were deeply ambivalent or opposed to capitalism.

A year ago, a Rasmussen poll found only 53% of Americans considered capitalism “superior” to socialism. In the new Pew poll, 29% described “socialism” as positive and a 2010 Gallop poll found 37% of all Americans thought socialism as “superior” to capitalism. These polls are a barometer of the volatility of public opinion in the U.S. and reflect a mass disillusionment with capitalism and Wall Street especially among young people.

Among those between the ages of 18 and 30, (i.e. those who have no memory of the Cold War and the Stalinist perversion of socialism in the Soviet union and Eastern Europe) the Pew poll found exact equal support (at 43%) for capitalism and socialism! All the recent polls (Gallup, Pew, and Rasmussen) agree that half of young people do not like capitalism and are looking for an alternative to the crisis, poverty and environmental degradation of capitalism. This is despite the fact that the corporate media says absolutely nothing positive about socialism.

Similar sentiments of rejection of capitalism were to be found among women, lower income people and those without college education. The Pew poll also found the term “progressive” is one of the most positive terms in the political lexicon with substantial majorities among all groups.

While support for “socialist” and “progressive” ideas may be confused, this represents a real shift in attitudes for workers and youth. The “socialism” supported in the polls isn’t necessary for fundamental worldwide change through working class emancipation, and it doesn’t even mean that people will immediately take to the streets to demand better wages, benefits, rights and social programs. The polls do make clear that there is not a tidal wave of support for Tea Party types, and that socialist ideas could be swimming with the stream in the coming years.