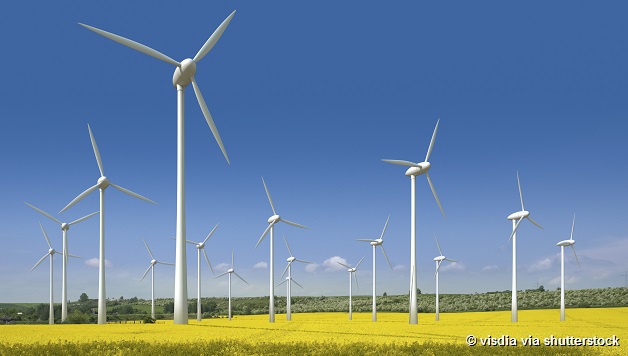 As the Copenhagen summit approached last December, Scientific American ran a striking cover story, “A Plan for a Sustainable Future.” This showed how wind, water and solar power could supply the entire world’s energy needs by 2030 (Nov 2009). Renewable energy is superabundant. Authors Mark Jacobson of Stanford University and Mark Delucchi of the University of California show that accessible sunlight alone (excluding sunlight that falls on the oceans) could provide more than 40 times the amount of energy being consumed around the world today.

The authors propose 3.8 million wind turbines worldwide to produce half the world’s energy supply, 1,700 million rooftop solar (photovoltaic) panels to produce another 40%, and half a million tidal turbines and other methods to produce the other 10%. They reject nuclear power, carbon capture, biomass and ethanol because of the pollution they produce. The worldwide footprint of the wind turbines would only be 50 square kilometres and the land could still be used for farming, the authors point out. Contrast that with the 13,000 new, large-scale coal power plants that would be required by 2030 at current rates of growth, “which would themselves occupy a lot more land, as would the mining to supply them” and it suddenly does not sound so absurd. It is clear thinking like this which makes this article stand out.

The problems identified with wind power and solar energy have been solved, particularly over the last decade, and they rely only on technologies already developed and implemented or on trial around the world. Energy from the wind and sun varies from place to place but, combined with a base supply of more consistent hydroelectric and tidal turbine power, these sources of energy become a “smart mix for reliability” using a “smart grid”. Building such an extensive infrastructure would certainly take time but, the authors note, “so did the current power plant network”.

The proposed numbers of solar panels and wind turbines are large but, during the second world war, “the U.S. retooled automobile factories to produce 300,000 aircraft, and other countries produced 486,000 more”.
The example of wartime retooling is significant because there was massive state intervention, with state planning of key industries. Yet U.S. company executives resisted converting to military production because they did not want to lose consumer market share to competitors who did not convert. Aircraft production ramped up significantly only in 1943 and peaked in 1944. Big-business interests (and the governments that defend them) are resisting converting to emission-free technologies for exactly the same reason today. That indicates a systemic failure of the capitalist market economy when faced with major social issues like climate change.

Of course, modern techniques should be able to significantly improve on 1940s level of production. And socialists would welcome converting existing car factories to produce solar panels and wind turbines, preserving jobs and re-using existing skills and facilities, while involving the workforce in democratic decision-making, and in drawing up and implementing such proposals.

Jacobson and Delucchi point out that only 17-20% of the energy in petrol is used to power a car. The rest is lost as heat. A similar scale of loss is incurred in power stations and the transmission of electricity to people’s homes. By comparison, electrically-powered cars use 75-86% of their power. A home or workplace powered by locally produced wind or solar energy has a similar scale of efficiency. So less energy is required from renewable sources to replace the energy used today. But that is not all, far from it.

Take the energy wasted in transport. The Scientific American feature does not consider public transport at all, and finds “problematic” that “not enough economically recoverable lithium exists to build anywhere near the number of batteries needed in a global electric-vehicle economy”. Jacobson and Delucchi suggest recycling. But a world where every family owns a car, even if remotely possible, would be immensely wasteful. Would it not be possible by 2030 to have a good quality of life without spending an hour or two every day stuck in traffic, driving to work and back with perhaps six billion other commuters?

Could not good quality, massively expanded, electric-powered public transport systems, perhaps including local taxi services, tempt people to travel by public transport? Past experience suggests it would. To help save the planet, a socialist society would break the grip of the road lobby, the powerful car, oil and related companies. It would employ socialist nationalisation without compensation to the fat cats, which could integrate all the big transport and energy corporations under workers’ control and management in a single plan of production for transport and energy. This plan would be drawn up democratically, involving workers in the industries, commuters and the government.

Moving freight back onto a massively expanded railway system is a vital part of a socialist plan to end global warming. Instead of parcels going direct in the parcel wagon of a passenger train they often go by lorry overnight to a hub, then to their destination by lorry the following day. This happens in every major town, and is duplicated by numerous carriers. Bringing the major carriers of freight into public ownership would end this nonsensical waste of energy and CO2 release.

This wastefulness goes deeper still. Karl Marx and Friedrich Engels showed that capitalism is driven to “constantly revolutionise” industry and commerce, continually transforming the globe. This is not to satisfy basic needs or to genuinely improve the quality of life of the population. On the contrary, workers and the oppressed have to fight constantly for better living conditions against ferocious resistance by the capitalist class. Capitalism seeks to create new needs, destroying what it built only yesterday. Fulfilling these new needs requires energy.

How much energy would be saved if planned obsolescence in cars and white goods was ended and stylish goods reliably lasted a lifetime? But, there is no profit in that for the capitalist! A hundred years ago – before Henry Ford championed this concept with the Ford Model T car in 1908 – it would have been almost unthinkable to live in a disposable world, where so many consumer goods are cheap rip-offs. Today, buying a domestic appliance or a car and expecting it to last a lifetime is almost unthinkable.

The solar panel has seen very little of the pell-mell development of new technologies when compared, for instance, to silicon chip development. Yet scientists regularly find ways of increasing the power of solar panels – by 25% in one recent development (“Lotus Leaf Effect Ramps Up the Power of Solar Cells,” New Scientist 28 Nov 2009). A socialist plan of production would pick up all these discoveries and make the necessary investment to see them through to production. Far fewer solar panels would then be required to hit the 2030 target.

The vast scale of production of solar panels would reduce their cost – economies of scale reduced TV flat panels from several thousand dollars to several hundred today. In a socialist system, solar panels could be supplied and fitted free to every household, school and public building by direct local council labour. Not only in a socialist system, perhaps. The cover story of the December 2009 Scientific American states: “A new wave of start-ups… install rooftop solar panels on your house. Upfront cost: Nothing”. In one such state-wide scheme in the US, homeowners simply pay the commercial solar panel company for their cheaper solar electricity supply. But it seems unlikely that the piecemeal approaches of these small capitalist start-ups, although they demonstrate the viability of solar power, will be enough. System change is required.

Jacobson and Delucchi make no mention of carbon trading, but seek capitalist solutions in subsidies, feed-in-tariffs (used in Germany to make carbon-free energy competitive) and other measures. These will have little effect worldwide while, under capitalism, coal is still considered cheaper than wind and solar power. Fossil fuels have almost cost the earth, but the free market simply cannot factor in that cost. Ultimately, it is capitalism that lies at the root of the problem.

The authors correctly state: “As we have shown, the obstacles are primarily political, not technical”. They fear that “nations will keep trying technologies promoted by industries”, meaning that capitalist governments will continue to bend to capitalist interests, unless “firm leadership” is given. It is ‘firm’ socialist leadership that is required.