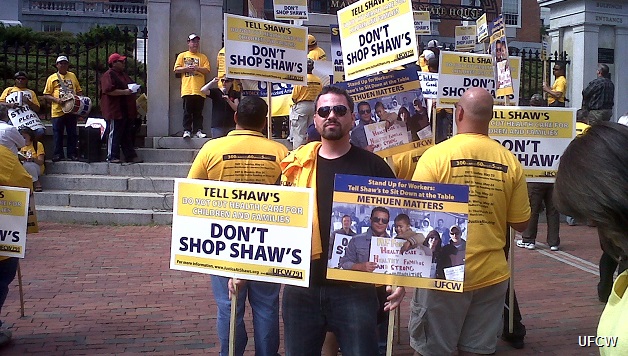 METHUEN, Mass.- On March 7, over 300 workers at a Shaw’s Supermarket distribution center voted to go on strike. Shaw’s had asked the workers to freeze their pensions and increase their health care payments by 30%. Management also wanted to lay off over 20 full-time workers. Instead of giving the workers a raise, the company’s initial proposal was to give them a Shaw’s gift card.

Meanwhile, the grocery chain’s parent company, Supervalu, has been doling out an annual bonus to CEO Craig Herkert of more than $2.5 million. In January, Supervalu announced profits of over $109 million in just one quarter. It is clear that the main objective of the company is to bust the workers’ union. Mike McKeon, a picket captain, told Justice, ”They’ll let the food and the employees just sit and rot… They’re willing to lose more money by leaving us out on the street than they would have lost giving us a fair contract.”

The striking workers are members of  Local 791. Since the beginning of the strike, most of the action has centered on daily pickets at individual Shaws stores and the distribution center. Pickets continued even during the heaviest rains ever recorded in New England.

The acts of solidarity and community support have been overwhelming. Only a few days into the strike, a Coca-Cola truck driver refused to deliver to a Shaw’s Supermarket in Dorchester, Mass. after hearing about the labor dispute. In New Hampshire, a UPS driver also refused to cross the line. Hundreds of union members and community activists have attended rallies, chanting, ”Don’t shop Shaw’s!”

It will be crucial as the strike continues to develop stronger solidarity with other local unions, community members, and activists. The workers know that this isn’t just about their own battle for a fair contract: it’s about many other working people’s jobs and benefits as well. Even though this is a small workplace, a victory would show many people that if you fight, you can win.

Socialist Alternative members have been on the picket line with workers almost daily, helping to turn away hundreds of cars from Shaw’s stores. This is a fight for the whole working class, and we will be there until the end.