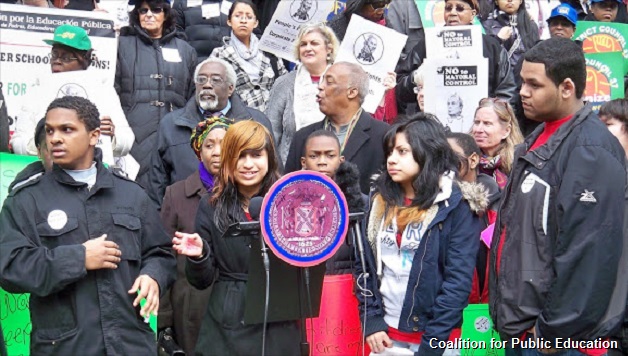 On March 4, 2010, coalitions of unions, student organizations, and community groups rallied around the country, staging strikes, teach-ins, and protests, as part of the National Day to Defend Education.

While the media has been dominated for months by the demagoguery of the right-populist “Tea Party” movement, the day of action received media coverage nationwide, providing an example to people across the country of what the grassroots organization of workers and students is capable of. It also raised the consciousness of millions who are dissatisfied with the capitalist system’s barrage of layoffs, cutbacks, and corporate welfare but who don’t see the possibility of forming an independent, left-wing alternative. March 4 events were held in 37 states, with the largest being in California, where the battle began as an opposition to Republican Governor Schwarzenneger’s severe cuts to education in the state budget. The call to resist cuts to education was heard around the country, with hundreds and in some places thousands turning out on the streets in opposition to cutbacks in their own states. Socialist Alternative played an important role in organizing demonstrations in New York, Boston, Olympia, Seattle, Bellingham, and Cedar Rapids while also building events in Chicago, Milwaukee, and Minneapolis. Across the U.S., the fight back for quality education has been growing. On March 5, 1,500 people gathered in South Central Los Angeles to begin the March for California’s Future; 250-mile trek organized by the California Federation of Teachers against the ruling class’s attacks on education in California. Crucially, the growing movement to defend education is beginning to recognize the need to link up with the movements in support of other social services.

As Josh Peschtalt, CFT organizer and one of the initiators of the march, said: ”We know that it can’t be just a fight for education. It’s also a fight for social services, health care… And the only way that we’re going to get there is if we tax the rich and the corporations, like the people of Oregon voted to do two months ago” (labornotes.org). The pressure against government policy is growing in New York as well. NYC Mayor Michael Bloomberg announced the closure of at least 19 schools in the city. There have been numerous protests and interventions at public hearings by teachers, parents, and students, including a demonstration of over 500 people outside of Jamaica High School in Queens, a center of the community and one of the schools slated to close due to education cuts. There is consensus that this is only the beginning of the fight, but many are unsure what the next step forward should be. There are elements in the protests who want to channel the struggle into electoral support for Democratic politicians, tying the movement to the same party who in many states and at the federal level is actually administering the anti-worker, anti-student budgets!

The various social movements should come together on a platform of taxing the rich and ending the wasteful wars in Iraq and Afghanistan to pay for full funding for social services. We need a massive public works program to reverse the growing unemployment rate and provide youth a secure future when they leave university. Only by working together, in protests, walkouts, strikes, and running our own candidates for office, can workers and youth build a vehicle to challenge the system. As one of the slogans raised during the March 4 protests goes, ”Money for jobs and education, not wars and occupation!”