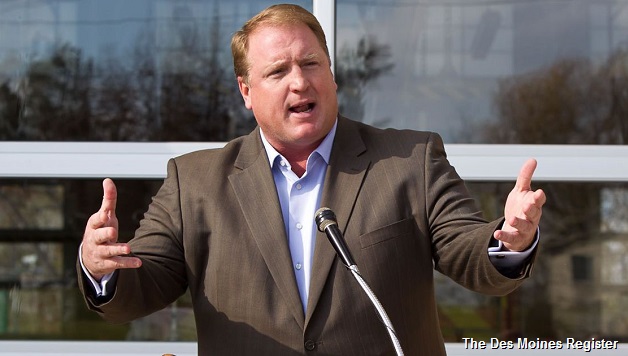 In the corporate media there is total consensus: Democratic Governor Chet Culver of Iowa is being “forced” to implement a 10% ($600 million) across the board cut to the state budget due to the world economic recession’s impact on the state. With the support of both his own party and the Republicans, no program is off limits – Medicare, food stamps, public education and more are all on the chopping block, hitting working people hard but particularly the state’s poorest residents, such as the thousands of unemployed workers who have lost their jobs since the beginning of the recession or the nearly 800 public sector workers who will be laid off as a result of the budget. According to Culver, further cuts will be “necessary” in 2011.

This recession was caused by rampant financial speculation, at the heart of the capitalist system itself, which amplified the effects of the housing bubble’s collapse in late 2008. In its aftermath the bipartisan policy at both federal and state levels has been the same: bailouts and “golden parachutes” for the rich, service cuts and layoffs for the poor. There are 113,100 unemployed workers in Iowa – 6.7% of the total labor force, a figure that is even higher among those under 29.

Fifty-nine percent of this year’s round of cuts, $332 million, will be to education, hitting the free lunch program for low income students, early childhood education and Iowa State University, among others. The state’s College Aid Commission’s budget is being slashed by $6.3 million, condemning high school graduates who can’t afford the prohibitive cost of college to a life of low-wage jobs in the service or retail sectors.

The contemptuous attitude of capitalism’s public representatives towards ordinary working people is shown by Culver’s assurance to the rich that any tax increases are “off the table.” This budget is a blatant attempt by Corporate America to make workers, students, and middle class people foot the bill for their crisis. This phenomenon is not unique to Iowa – similar budgets are being forced through across the country, most notably in California where a fight-back movement has emerged, with mass demonstrations and school occupations that have forced Governor Schwarzenegger to concede more funding to education.

For the Californian workers and for us in Iowa, the battle has just begun. The unions and and student organizations in California that initiated the movement there have called for a National Day of Action to Defend Education on March 4th. Local actions are being planned across the country, and Socialist Alternative in Cedar Rapids will be protesting in opposition to the cuts and for a solution to the state’s budget crisis that benefits students and working people. We are appealing to the American Federation of Teachers in Cedar Rapids, the Hawkeye Labor Council, student organizations, the Linn County Green Party and all progressive community organizations to join our branch in building an opposition to the corporate parties and their anti-worker, anti-poor attacks. We didn’t make this crisis; we refuse to pay for it!