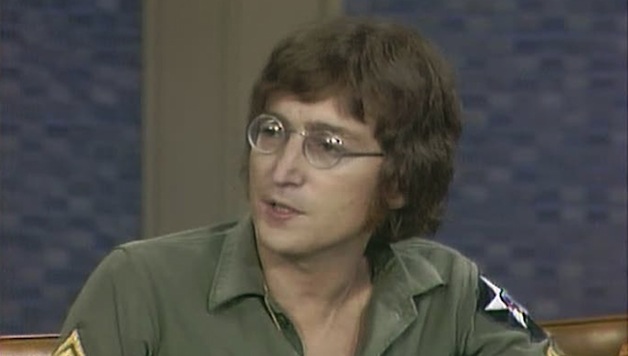 As the latest bout of Beatlemania subsides, GREG MAUGHAN looks at the enduring appeal of John Lennon, the most iconic member of the ‘Fab Four’.

Forty years ago, the Beatles split up after seven years, thirteen studio albums, 21 US number one singles, and having attained a level of world-wide fame never before achieved by any group of working-class musicians. Their popularity and profile is still strong – the remastered release of their entire back catalogue has recently entered the charts en masse, with a record twenty different albums in the Top 75 at one time, while the anniversary coverage in the media has been extensive.

Although all of the Beatles were greatly talented individuals, the most iconic member was almost certainly John Lennon. Lennon’s work with the Beatles and his solo material (right up until Double Fantasy, which was released barely a month before his murder in 1980) displays a verbal wit, musical verve and experimentation but most centrally at its best, an empathy and an ability to absorb and be effected by events, both personal, close to home, and internationally.

It was this tendency for Lennon to be touched by world events, combined with his instinctive sympathy for the ‘underdog’, that led him towards political questions and saw him, for a period at least, describing himself as a socialist. This is an aspect of the Beatles which was not touched upon in any of the mainstream media coverage of their 40th anniversary. The central contradiction was that, at one and the same time, the Beatles were a ‘corporate’ band, whose faces adorned countless merchandise and who were aggressively marketed; while all the time personal experiences and world events pushed all the Beatles, but Lennon in particular, further away from the mainstream.

Born in 1940, Lennon was brought up by his aunt Mimi in comfortable surroundings. Though by no means rich, Lennon was certainly the ‘poshest’ of the Beatles. He was a show-off and an attention-seeker as both a child and a teen; this can be explained to some extent by Lennon’s abandonment issues with his parents.

In a certain sense, the meteoric rise in popularity of the Beatles fed into his ego, but at the same time Lennon felt increasingly constrained by his fame. The huge controversy in the US in particular surrounding his claim that the Beatles were ‘bigger than Jesus’ is a good example of this. The corporate image that Beatles manager Brian Epstein was keen to foster meant that huge pressure was put on Lennon to avoid areas of controversy, and the backlash against these comments seemed to reinforce that.

But at the same time, the movement against the Vietnam war was developing and Lennon, increasingly influenced by the ‘Hippy scene’ and pacifist ideals, felt that he should use the position he had. Ray Coleman details this in his biography, Lennon: “Lennon wanted to condemn publicly American aggression in Vietnam at the height of the Beatles fame. Epstein warned him against it, and John, who for a time did not want the roller-coaster of Beatlemania to wane, went along with the ‘party line’. It was a bitter pill to swallow”.

But Lennon could only constrain himself for a period and, as he explained in a later interview with the left newspaper Red Mole: “There came a time when George and I said ‘Listen, when they ask next time, we’re going to say we don’t like the war and we think they should get right out’. That’s what we did. At the time this was a pretty radical thing to do, especially for the ‘Fab Four’. It was the first opportunity I personally took to wave the flag a bit”.

Although Lennon continued to hold anti-war and pacifist beliefs, the effect of the drug-fuelled ‘psychedelic’ scene that he became part of pushed him towards individualist, idealist and even religious answers to the questions he was asking. These were both political in nature, about the suffering of the masses in the neo-colonial world in particular, but also personal for him, about the ephemeral nature of his extreme fame.

The Beatles famously went to a spiritual retreat in India organised by the Maharishi Yogi in 1968. During this time, they wrote many of the songs that went on to become the White Album. Lennon’s experience there led him to become disillusioned with many of the spiritual ideas that he had been pursuing. This was summed up by the song Sexy Sadie, which was a sarcastic dismissal of the Maharishi. The retreat also coincided with the historic events of May 1968 in France, where the greatest general strike in history was unfolding. An avid reader of newspapers, Lennon followed these events from afar and was pushed to ask pertinent questions about how society could be changed and what sort of society we could have instead.

His ambiguous response to these questions was the song Revolution, of which two different versions were released. Lennon’s pacifist ideals meant that he feared calls for revolution could fuel violent oppression from the state and the first version of the song released states “you can count me out”. However, in the version included on the White Album, the lyrics alternately state that you can “count me out, in”. This was a big step for Lennon, moving from a desire to change the world that centred on idealism and individual change – ‘revolution in the mind’ – to looking towards mass movements and collective struggle.

From here, Lennon and his partner Yoko Ono became more involved with protest, conscious of how his position and profile could be used to inspire struggle. The ‘Bed-in’ protest, for example, although quirky and slightly naive, was genuinely motivated.

The break-up of the Beatles in 1969 coincided with an increasing disillusionment with hippy ideals and a desire for real change. Lennon summed this up himself: “Of course, there are a lot of people walking around with long hair now and some trendy middle-class kids in pretty clothes. But nothing changed except that we dressed up a bit, leaving the same bastards running everything”.

The period of 1970-1973 was probably Lennon’s most overtly political in his music. Lyrically and rhythmically, he was influenced by the chants and slogans heard on demonstrations. He composed certain songs with the explicit aim of having them taken up by workers and young people in struggle. Power To The People is a prime example of this: “Say we want a revolution/We better get on right away/We’re going to bring you down/when we come into town/Singing power to the people”.

It could be argued that others have more effectively summed up working-class life in their music and have expressed the need for change more subtly, but Lennon’s aspiration to help push forward mass movements and the sloganeering of some of his music in this period came from a commitment to the idea of struggle and personal questioning about how he could add to this, which should be respected.

He also expressed this support financially, as Roy Coleman explains: “The civil disturbances in Northern Ireland were erupting into civil war. The Nixon administration had taken the gloves off when they murdered four students from Kent State University during a demonstration in 1970. The Lennons became more and more active in radical politics. They donated money to Michael X’s Black House, recorded a single, ‘Do the Oz’, for the defendants of the infamous ‘Schoolkids Oz’ trial”.

The alternative society that he aspired to, which at the time he would have seen as socialism, was summed up in the song Imagine. The continuing popularity of this track attests to the appeal that these ideas have amongst ordinary people.

Following Lennon’s move to the US, he continued his involvement in politics, singing at benefit concerts organised by the American trade union movement, recording songs about, and to raise funds for, the Irish civil rights movement and continuing his involvement in anti-war politics.

Lennon planned a 33-date tour of the US in the run up to the 1972 election as part of a drive to get Nixon kicked out of the White House. However, fearful of the effect that this could have, the Nixon administration tapped Lennon’s phone, put him under FBI surveillance and initiated deportation procedures.

Tied up in the fight against deportation, plans for the tour were dropped and Lennon became disillusioned after Nixon’s re-election. Through a combination of burn-out from his deportation struggle and a move away from the organised working class in the radical US movement, Lennon became less actively involved in politics.

But the ideals that Lennon had looked towards in this period stayed with him until his death. The central question that faced him was how to reconcile his position in society and his own fame with the idea of mass struggle. Nearly thirty years since his death and forty years since the break-up of the band that brought about his fame, we can still enjoy a body of musical work without parallel, be inspired by the same struggles that inspired him, and help build a movement that can effectively bring about the change in society that he looked towards.

For more on Lennon’s politics, see his interview in the socialist zine Red Mole from 1971.

Seattle: The Showbox and the City

The Lasting Legacy and Genius of Prince