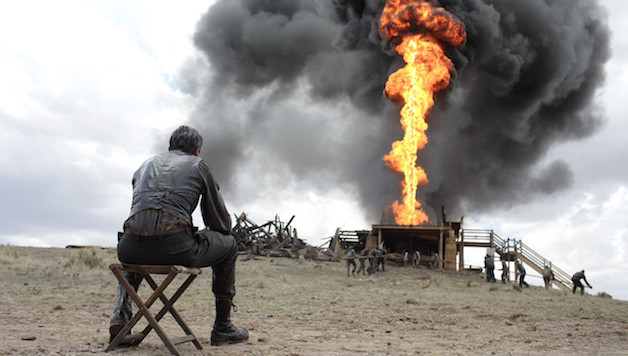 In bringing Upton Sinclair’s 1927 novel, Oil, to the screen as There Will Be Blood, writer-director Paul Thomas Anderson has been faithful to the author’s socialist intentions. The adaptation also resonates with the politics of today as the neo-cons kill to keep democracy safe for big oil.

The film title has multiple meanings. One is from the story’s revivalist preacher – with his Church of the Third Revelation – who promises to wash away sin in the blood of the Lamb. Another is for the blood shed by the workforce. Yet a third is the denouement, which I shall not give away.

There Will Be Blood is a relief from the progressive scripts where no one lifts anything heavier than a laptop or a pistol. Once again, the commercial screen shows human labour at the point of its exploitation. More than that, the cost in lives and limbs is central to the plot. The protagonist’s adopted son is deafened by an exploding drill.

In the lead role of Daniel Plainview, Daniel Day-Lewis is transfixing. With his measured tones and suppressed rage, he leans his body forward like a man always pushing against a headwind. In escaping from the might of Standard Oil, Plainview has to match its chicanery and ruthlessness.

We are shown, not told, what capitalists must do, thus spared a lecture in Marxism 101, as in Pontecorvo’s Burn! (1968). For instance, Plainview’s quail shooting is a metaphor for his treatment of the farmers whose land he acquires, for they too are small and almost flightless, no match for his double-barrels of guile and greed. Plainview is the personification of capital, realising the fundamental proposition of historical materialism – we become what we do, as a species and as individuals.

The land-owners offer Plainview and his boy the warmth and decencies of folk for whom faith is indeed, as Marx observed, “an expression of real suffering and a protest against real suffering”. As secular outsiders, Australians risk minimising the conviction that quickens politics and business in the USA.

The teenage preacher is something else. He falls victim to the sins of the flesh and to the vagaries of the stock-market. Yet he remains more than a caricature of hypocrisy, and not merely a premonition of recent Televangelists. He and Plainview compete for redemption, each obliging the other to declare what they fear is the truth in order to get their hands on the means to earthly salvation.

As a piece of film-making, There Will be Blood is astounding. Jonny Greenwood has provided a soundscape more than a soundtrack. The noises from human labor and machines are set against silences of equal potency. The dialogue is minimal. Voices are rarely raised.

Though shot in color, the cinematography revels in the plays of light and shade, employing a Mannerist use of candlelight and lanterns to focus on moral choices. Visually, the land is also a player, the rocky hills like a chorus of mutes. The earth resists the small farmers and the corporations. But nature also provides the oil.

As Anderson’s subject demands, he pays his respects to Citizen Kane (1941), though he eschews a device equivalent to “Rosebud”, the dying word which Orson Welles used as the inexplicable clue to Kane’s character. The hurt in Plainview’s childhood is evident in his adult behavior as he alternatively protects a child from beatings but beats up and murders grown men. Neither Anderson nor Day-Lewis lets slip a trace of what had happened in what script-writing courses call the back-story. The tension is the greater for our not knowing.

Hollywood faces a tougher challenge before it can rest of this one-off radicalism.

In 1933, Sinclair published Upton Sinclair presents William Fox, which the founder of Fox Pictures had commissioned as a bargaining chip to win back some of the assets that he had lost in his failed bid to takeover MGM. The idea was to threaten to expose the corrupt and crooked dealings of the movie moguls in order to bring them to heel. Sinclair defied Fox and published.

As if that weren’t un-American enough, Sinclair then won the Democratic nomination for the governorship of California in 1934. He promoted his version of socialism as EPIC, End Poverty in California.

The studios raged. They raised $500,000 to back the Republican incumbent by deducting two days pay from each of their (all non-unionized) employees. They made mock newsreels of hoboes slavering to vote for Sinclair so he could bring Sovietism to the West Coast.

Here are two scripts waiting for Hollywood – The Life of William Fox and another one on how the studio bosses defeated its author’s run for office. Don’t hold your breathe for the current owner of Fox, Rupert Murdoch, to make either. Hollywood is yet to film of Sinclair’s masterpiece, The Jungle (1906), which exposed the Chicago meatpacking Trust around Swifts before envisioning a socialist America, which leaves Obama’s preaching about a new mindset in the shade.

Film reviews are often printed with a line of stars to summarize the critic’s response. I visualise my evaluation of movies by clock faces, one for each time I checked to see how much longer I had to wait before escaping. At over three hours, There Will Be Blood earned not a single clock face.

This review was originally published on the website of the Socialist Party Australia, www.socialistpartyaustralia.org.