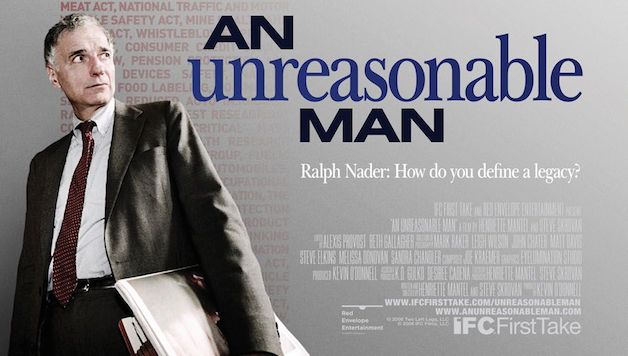 Anyone concerned about the challenges – and possibilities – of building a movement against Corporate America and their two-party system will be interested in An Unreasonable Man, an excellent new documentary about Ralph Nader.

Nader’s “unreasonable man” status stems from his challenge to corporate power through decades of consumer activism and above all his independent, left-wing campaigns for president, which have earned him the lasting hatred of the political establishment.

The film follows Nader’s rise to public prominence, beginning with his successful campaigns for auto safety in the late 1950s and 1960s. Out of these campaigns, he launched a consumer advocacy movement made up of thousands of young volunteers known as “Nader’s Raiders.” These organizations researched corporate crimes and government corruption and lobbied for stronger regulations. According to Nader, “our goal was to show that it is possible to make change within the system.”

However, in the film Nader recognizes that a crucial factor for his success was the climate created by the mass antiwar, civil rights, labor, and women’s movements of the 1960s and early 1970s, which “made our efforts appear less extreme.” These movements generated enormous pressure on the ruling class to grant reforms in order to maintain the legitimacy of their system and prevent the development of a revolutionary challenge to the two-party system and capitalism.

It was this context together with the post-war boom, which gave big business the economic room to grant concessions, that enabled Nader’s citizens’ groups to win a number of important reforms despite their limited, reformist strategy. These included the Clean Air Act, the Freedom of Information Act, the Occupational Safety and Health Administration, and the Mine Health Safety Act.

Nader was hopeful that more far-reaching reforms could be achieved after Democrat Jimmy Carter was elected president in 1976. But the mass movements that had propelled earlier reforms were in decline – in many cases co-opted into the Democratic Party – and Corporate America had regrouped. The end of the post-war boom in 1973-75 ushered in a period of global capitalist economic crisis, forcing U.S. corporations to relentlessly cut costs. Since then, we have witnessed a global neo-liberal offensive against previous gains won by workers and the oppressed.

Capitalism with a Human Face?

This strategy is based on the idea that by educating and organizing consumers, they could stand on equal footing with the big corporations. But the capitalists’ control over the productive forces of society – the factories, raw materials, and labor power – gives them the decisive upper hand and allows them to control the political system, the media, the schools, and the courts.

Central to Nader’s political outlook is the utopian idea of “returning” to a friendly, democratic form of capitalism based on small businesses. He views the massive concentration of capital as flowing from bad government and corrupted politicians, rather than the logic of the capitalist system itself.

The reformist idea that the current system of capitalism dominated by huge multinational corporations can be replaced by a system of small-scale, consumer- and worker-friendly businesses is impossible. The profit system inevitably gives rise to huge, global monopolies like Wal-Mart, GM, GE, and McDonalds, which use their vast economic power and resources to dominate the political system. They are compelled by competition to attempt to do away with any reforms that cut into their profits.

To put an end to corporate domination requires a socialist strategy of mobilizing the collective power of the working class to bring the corporations into public ownership and democratically use their resources to serve society’s needs rather than the profit system.

Nader’s Challenge to the Two-Party System

Despite these political weaknesses, Nader’s overriding strength over the past period has been his willingness to challenge the two-party system. He is the only prominent progressive figure in the U.S. who has been willing to step into the national electoral arena and provide a left-wing alternative to the Democrats.

In the context of a global neo-liberal offensive and the Democratic Party’s swing to the right, many former left-wing leaders have followed suit and lowered their demands to what is acceptable to the Democrats and big business.

Nader, in contrast, has been largely unwilling to retreat and has drawn the conclusion that to achieve the reforms he previously fought for now requires challenging the corporate domination of politics. He explains in the film that the Democrats steady march to the right led him to grow increasingly disenchanted with the two-party system. In contrast to media portrayals of Nader as an egomaniac, he says, “I waited and waited for someone else to run [for President], but no one did.”

In 1996, he agreed to let the Green Party stand him as their presidential candidate. But in 2000, inspired by the mass protests that shut down the WTO and the emergence of the anti-globalization movement, Nader decided to run an all-out campaign for President.

Nader ran on an anti-corporate, pro-worker platform that included: a national minimum wage of $10 an hour; universal, single-payer healthcare; abolishing the death penalty and ending the “war on drugs;” the repeal of NAFTA and the WTO; repealing the Taft-Hartley Act; strong environmental and consumer protections; and a massive public works program to provide jobs for all.

Nader’s denunciations of the corporate-dominated two-party system and these radical demands resonated with tens of millions increasingly fed up at big business. Hundreds of thousands attended “super-rallies” that packed Madison Square Garden and other venues throughout the country.

Despite this massive support, Nader’s campaign was blacked out in the corporate media. He was excluded from the presidential debates run by corporate lobbyists and former heads of the Democratic and Republican National Committees, even though two-thirds of Americans wanted him included in the debates.

Yet even with all these obstacles, Nader was polling 6-7% one month before the election. However, in the last few weeks of the campaign the Democratic Party and their allies in the leadership of the labor, environmental, women’s, and civil rights movements launched a massive campaign against the Nader campaign. With Bush and Gore in a very tight race, Nader’s support got cut in half as many of his supporters reluctantly voted for Gore to stop Bush. In the end, Nader got nearly 3 million votes, 2.7% of the total, the highest vote for any independent progressive presidential candidate since the 1920s.

Unfortunately, Nader failed to use this momentum to build a wider left-wing political party that would draw together the forces that supported him, including Greens and activists from the labor, anti-globalization, women’s, and civil rights movements, and would build mass struggles outside of elections as well as continuing to build up support in local and national elections.

After the elections, the Democratic Party and their allies in the media launched a vicious smear campaign, blaming Nader for Bush’s victory. They willfully ignored the fact that Gore actually won the election, but refused to fight the racist disenfranchisement of African Americans in Florida and the cold coup carried out by the right-wing Supreme Court. It is also worth recalling that Gore’s vice presidential candidate in 2000 was Senator Joe Lieberman, who continues to call for more troops to be sent to Iraq and has been one of Bush’s biggest allies in Congress.

The filmmakers include interviews with some of the most ferociously anti-Nader liberals, such as Eric Alterman of The Nation, who literally foams at the mouth as he blames Nader alone for six years of Bush’s right-wing policies. But it is the Democrats who are to blame, as they have done hardly anything to prevent Bush from carrying out his attacks.

As former talk-show host and prominent Nader supporter Phil Donohue says in the film, “The Democrats nailed him for saying, ‘[There’s] not a dime’s worth of difference [between the two parties]’, then spent the next four years proving him right,” voting for the wars in Afghanistan and Iraq, the Patriot Act, No Child Left Behind, and tax cuts for the rich.

Nader stood up to tremendous, unprecedented pressure to run again in 2004. He faced hostility from nearly the entire liberal left, including many who supported him in 2000. In the film, Nader reveals that Democratic donors attempted to bribe him not to run, offering to “lavish money on his organizations” if he would drop out of the race or “strangle them” if he ran.

Despite the massive Anybody But Bush mood, it was absolutely correct for Nader to run in 2004 and again provide an alternative to those workers and youth who were sickened by Kerry and the Democrats’ pro-war, Bush-lite politics.

Once Nader declared he was running, the Democrats launched a ruthless and undemocratic campaign to prevent him from getting on the ballot in many states, hiring lawyers to tie up his campaign with legal challenges to prevent him from getting his anti-corporate, antiwar message out. Unfortunately, the majority of the Green Party leadership buckled to this pressure and refused to endorse Nader, instead choosing to run an unknown candidate in a “safe states” campaign. Regrettably, in an attempt to get on the ballot Nader mistakenly accepted the Reform Party ballot line in a few states. In the end, Nader appeared on the ballot in only 34 states, and was excluded from certain big states like California.

Given these obstacles, Nader received just under 500,000 votes in 2004. However, millions supported his campaign and seriously debated voting for him. For example, in the summer of 2004 12% of young voters, 10% of blacks, and 8% of women said they were planning on voting for Nader.

The debate stirred up by Nader’s campaigns for president on the character and role of the Democratic Party and whether or not to break from them are unavoidable, key issues for any politically-active worker or activist. Nader’s campaigns, despite political and organizational limitations, have helped legitimize the idea of independent, left-wing politics, paving the way for further antiwar and working-class challenges to corporate politics. Anyone interested in this debate and this cause should see this film.