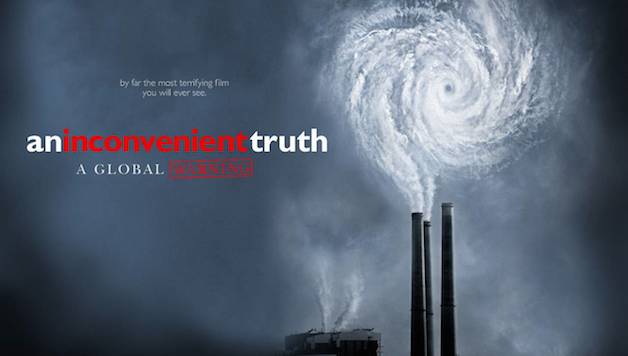 In the documentary An Inconvenient Truth, former Vice President Al Gore explains in simple terms the cause of global warming and why it is putting the lives of millions at risk. Anyone who cares about the world should see this film.

Here are the basics: greenhouse gases get trapped in the atmosphere, the atmosphere holds more of the sun’s heat, and global temperatures rise.

Carbon dioxide (CO2), the gas emitted from burning fossil fuels, is the primary culprit. The higher the CO2 level in the atmosphere, the higher the earth’s temperature. Today, CO2 levels are higher than at any point in the last 650,000 years! Without change, the level will rise exponentially.

The effects are already measurable and disastrous. The 10 hottest years on record have all occurred since 1992, and 2005 was the hottest. Record numbers of hurricanes and tornadoes, heat waves (like the one in Europe in 2003 which killed 35,000), floods, and extreme droughts (killing millions in Darfur and Niger) are all products of global warming.

But An Inconvenient Truth also shows why scientists fear these disasters may only be precursors to a much larger global catastrophe.

In recent years, six ice shelves the size of Rhode Island have suddenly melted from Antarctica into the ocean. Disturbingly, scientists have observed identical signs of melting on much larger portions of Antarctica and Greenland. If one of those broke off, the global sea level could increase by up to 20 feet, threatening cities like New York, Amsterdam, and Beijing, potentially killing and uprooting millions of people.

But what can be done to stop global warming? Gore correctly urges people to educate themselves, spread the word, and act, but his call to action is severely limited. He advises people to pressure Congress and vote for environmentally conscious candidates, while urging people to reduce their personal CO2 emissions.

Gore’s electoral solution is limited because both parties, including the Democrats, are funded and controlled by big business. This forces politicians like Gore to act in the interests of the corporations who fund their campaigns. It was under the Democratic administration of Clinton and Gore that environmental disasters like NAFTA and the WTO were created.

30% of annual CO2 emissions are caused by large-scale forest burning. The oil industry, another primary polluter, works hard to prevent the emergence of alternative energy sources and to convince people that global warming is “theory rather than fact,” to protect an estimated $100 trillion worth of unexploited oil.

The corporate press follows suit. Although an independent study of 928 academic articles on global warming found that not one questioned its existence, 53% of popular press articles portrayed global warming as debatable.

In the film, Gore quotes Upton Sinclair saying, “It is difficult to get a man to understand something if his salary depends on his not understanding it.” Frighteningly, the corporations and politicians who create economic and environmental policy benefit greatly from not understanding that global warming is a problem that needs to be addressed immediately.

Changing this requires a population that is organized and willing to build mass movements to take away the immense power that corporations have over the world economy, so communities can democratically decide how to use the world’s resources.

To do this, we must face another inconvenient truth: the system of capitalism, with its relentless drive for competition and short-term private profits, is incapable of finding a solution to an environmental problem that requires international cooperation and long-term democratic planning.

We must recognize the need for socialism.