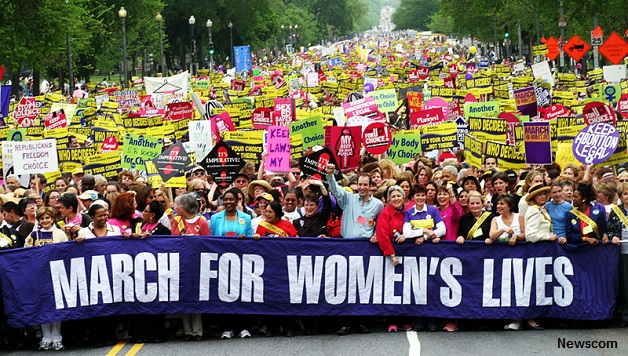 The March for Women’s Lives in D.C. on April 25 of this year was the largest public demonstration in American history, with over 1,150,000 people in attendance (according to the official crowd count by organizers).

Women of all ages from all over the country attended; families came with as many as four generations marching together. For many young women, it was the first demonstration they had attended, and the energy and determination displayed was impressive.

The Socialist Alternative contingent at the demonstration carried a banner with a main slogan reading “Free abortion on demand,” and also, “Stop violence, harassment, and rape,” “Free healthcare and childcare,” “Vote Nader,” and “End the occupation of Iraq now.”

The massive attendance was a graphic demonstration of the level of anger among women across America at George Bush’s anti-choice offensive.

In 2002, Bush declared the Sunday before the 30th anniversary of Roe v. Wade to be “National Sanctity of Human Life Day,” and he connected the battle against the right to choose with the war on terrorism, saying, “We are engaged in a fight against evil and tyranny to preserve and protect life.”

The ban on the misnamed partial birth abortion last year was the first ban on an abortion procedure since the Roe v. Wade ruling legalized abortion. The determination of the marchers to ensure that women’s rights are not rolled back even further under this administration was palpable.

However, aside from its size the most noticeable feature of the demonstration was the Democrats’ stranglehold on the whole event.

Although Kerry himself wasn’t present, and indeed was mentioned very little, we were continually urged from the platform that demonstrating was not enough – to achieve our demands we must VOTE in November. And let’s make no mistake – the speakers did not mean voting for Ralph Nader. One speaker actually began her speech with an attack on Nader and his supporters, not Republicans or anti-choice campaigners, or, God forbid, the Democrats who have assisted in the diluting of Roe v. Wade for the last 30 years.

The Democrats had such “progressive” heavy hitters on the platform as Madeline Albright and Hillary Clinton (who was greeted by the kind of enthusiastic screaming normally associated with teen idols at pop concerts).

Bill Clinton gained support from women’s organizations for his 1992 campaign promise to pass a Freedom of Choice act and to urge the repeal of the Hyde Amendment, a law enacted by previous Democratic president, Jimmy Carter, which ended Medicaid payments for abortion.

The Clinton administration not only failed to deliver on these promises but went on to deny federal funding for prisoners’ abortions, as well as banning abortions in military personnel hospitals. Federal employees’ health insurance was also barred from covering abortion procedures.

Unfortunately, this demonstration’s organizers haven’t learned the lessons of the past. The women’s movement has to beware of its “friends” in the Democratic Party who use women’s rights as a lever to get votes without actually delivering real lasting change.

Major change is needed on reproductive rights, not simply the defense of the status quo against the religious right apparently being offered by the Democrats. Abortion rights are effectively denied to anyone in this country too poor to pay for health insurance. Provision of these services is limited to only 13% of U.S. counties, and childcare and support facilities for those who wish to have a child but require assistance to make this viable range from poor to nonexistent. These issues will not be addressed by the Democrats.

The only way that even the most basic gains for women were won was through mass mobilizations and real grassroots-based campaigns. It will require a mass movement and the construction of a new political force in America, independent of big business, and basing itself on the real needs and desires of women, youth, workers, and people of color, in order to truly take the struggle for women’s liberation forward.