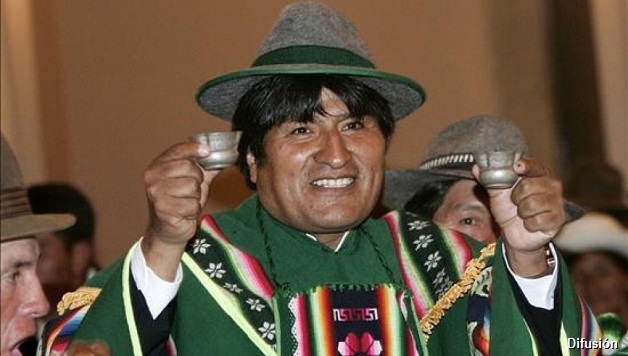 In the last few years, Latin America has been engulfed in a wave of revolt against privatization, cuts in social services, and attacks on workers and the poor. This has taken the form of mass protests on the streets and at the ballot box. Evo Morales is the latest popular leader to ride this wave into power.

Morales and his party, the Movement Towards Socialism (MAS), achieved overwhelming electoral success in December 2005, winning over 53% of the vote. This was the highest share of the vote received by any Bolivian president in the last thirty years.

Morales gained mass support due to his role as a coca farmers’ union leader and the radical rhetoric he has used. His victory was greeted with massive celebrations in Bolivia and throughout Latin America.

Morales has said the “MAS is looking to gain power through the ballot box, but if they [the corrupt elite] cannot guarantee the national elections there will be an armed insurrection, an uprising to liberate the people.”

Bolivia is the poorest country in South America, and one of the poorest in the world. The country’s entire central bank reserves stand at only $1.6 billion; barely the amount of Tommy Hillfiger’s sales last month (Associated Press 29 Jan 2006). Millions scrape by in desperate conditions without access to roads, electricity, clean water, or sanitation.

This massive poverty exists in a country that is rich with natural resources. Bolivia has large amounts of timber, tin, and gold, as well as the second largest proven natural gas reserves in South America. These resources have not been used to develop the economy and living conditions of Bolivians, but instead have been stolen for profit by multinational corporations.

This situation fueled massive protests throughout the country last year. In June 2005, the streets were filled with teachers, miners, coca farmers and others who forced the resignation of the former president, Carlos Mesa.

In cities such as El Alto, the workers and poor, through a general strike, ran society for many days. The main trade union federation (COB) and neighborhood groups organized mass meetings of workers and peasants to debate the road forward for the movements of the oppressed.

These protests didn’t stop at ousting the president. One of their central demands was for the nationalization of the hydrocarbons (oil and gas reserves). The masses of Bolivia consciously saw this as a step to end the hardship and humiliation they suffer from.

Morales Under Pressure
Bolivians have high expectations that the new government will strike blows against the ruling class and implement policies to improve the lives of the working class and poor. However, at the same time key sections of activists in the workers movement are skeptical about what Morales will actually do. The mood amongst the most militant and combative sections is summed up by one of Bolivia’s famous miners who, dynamite strapped to his helmet, was quoted in the London based Observer as saying: “On December 18 we will crush the traitors who have sold our resources and lied to the people. Morales is our brother and we trust him, but he should beware of not delivering on his promises”.

Shortly following the election result the Bolivian trade union confederation, the COB, gave the new government an ultimatum that they had three months to implement their election program, the nationalization of natural gas and petroleum, the breaking up and redistribution of the rich landed estates, and an increase in the minimum wage or mass street protests would begin again. __The teachers’ trade union confederation has given the government two months to increase wages by 20% or it will begin strikes. Even before the election, the General Secretary of the Peasants Confederation warned “If the new government changes nothing, it will have to go as well – and that can also happen to Evo”.

This questioning is rooted in the role Morales has played in the mass movements over the past period. In 2003, when a referendum was called with rigged questions on the issue of ownership of the oil industry, the mass organizations called for a boycott. Morales and the MAS leadership urged participation. As a consequence of this policy he was expelled from the COB at the time.

In the 2005 mass movement he vacillated over support for nationalization counter-posing to it support for a 50% tax on the profits of the private companies. __Since taking power, one of Morales first announcements was to reduce the Presidential and Ministerial salaries by 50%, which has been very popular. At the same time he has also sought to reassure sections of the ruling class.

Morales has said he only plans a “symbolic nationalization” of the hydrocarbons. His plan seems to leave the assets of the multinationals in private hands, while pushing for renegotiating the contracts with foreign corporations to raise their taxes.

Morales also used his inaugural address, both to pay respects to the revolutionary leader Che Guevara and also to reassure Bolivia’s big landowners that he will not redistribute any “productive land.” He says one thing out of one side of his mouth, and the exact opposite out of the other side. At this point, his “land reform” means respecting the property of the huge plantations and latifundios, and distributing only barren, remote areas to the masses of landless peasants.

Morales is attempting a “balancing act” between the big companies on one side, and his base of support, the workers and poor, on the other. However, the same big companies that Morales is courting are the ones responsible for the impoverishment of the working masses. Therefore, he will ultimately be forced to support either the oppressors and the system that they represent, or the workers’ organizations and their demands for a better life.

A Continent in Revolt
The developments in Bolivia are taking place alongside a series of other victories by left-wing candidates throughout Latin America in the last few years. This year will likely see this trend continue.

The most notable example, of course, is Venezuelan President Hugo Chavez. This country’s “Bolivarian Revolution” has been boosted by massive oil revenue, which has allowed a number of reforms. These reforms, such as battling illiteracy, lowering food prices, and redistributing some land, have greatly benefited the people of Venezuela.

However, Chavez hasn’t completely broken with capitalism. As a result, the government has still failed to resolve the unemployment, poverty, and housing shortages and the masses are getting restless, as was shown by the 75% abstention rate in recent elections.

Other left wing candidates have moved rapidly to the right after being elected. Most recently this includes Michelle Bachelet in Chile and Lula in Brazil, who has carried out vicious attacks against the workers he was elected to represent.

Despite all of his flaws, Morales could be pressured by the COB and other social movements to institute important social reforms, such as nationalization of the hydrocarbons and redistribution of the land.

While the recent left election victories are a step forward, they are not nearly enough. Rather than relying on individual leaders, the working class of Latin America needs to take political and economic power into its own hands.

The essential issue, however, is the need for a decisive break with capitalism and an alternative to the policies of big business.

Workers and activists throughout the region need to build mass, democratic, revolutionary parties of their own. In Brazil we have seen an important step in this direction with the emergence of the Party of Socialism and Liberty (PSOL), which is growing and crystallizing layers of opposition to Lula.

The heroic struggles of the Latin American workers and youth have already inspired many around the globe. It is time to take the struggle further. Latin America and the rest of the underdeveloped world will never see an end to widespread poverty, war, and corruption on the basis of capitalism. Only a socialist transformation of Latin America can meet the day-to-day needs of the working class and poor.