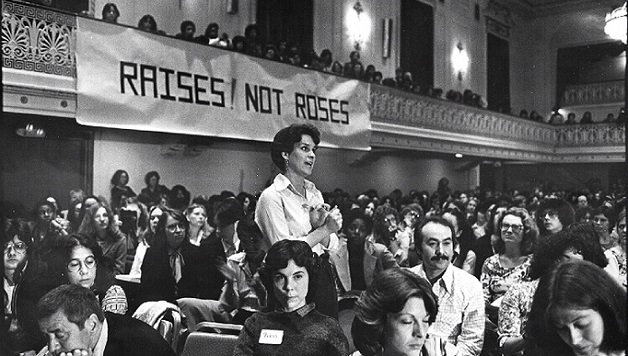 Have you ever thought what your mother’s life was like, or your grandmother’s?

What would it be like to live that life? Expected to look after your family, perhaps you would also work for wages outside the home. But you would never receive equal credit, money or respect. On some level you were expected to hand over your authority to someone else, someone male. Sort of like the Jim Crow south in the days when white teenagers addressed an adult black man by his first name or as “boy”.

The recent death of Betty Freidan, a leading figure of the American feminist movement of the 60s, was a cause for the bourgeois media to reflect on the changes in the lives of US women over the past four decades. She had been co-founder of the National Organization of Women (NOW) and the National Abortion and Reproductive Rights Action League (NARAL). The press recounted various anecdotes from Ms. Freidan’s life such as the comments that were made to her when she graduated with honours from a prestigious university: “Betty, a woman wants to marry a doctor, not be one”.

Yet by 2001, nearly 46% of first year medical students in the United States were female. Comparable strides have been made in most of the middle class professions. But how well are women doing, really?

In 2003, during the first year of the occupation of Iraq, US poverty rates grew for the third straight year and women were more likely to be poor than men. Inequality levels in 2005 have gotten even worse. Since the year 2000, 5.4 million more people, including 1.4 million children, have been added to the poverty rolls.

Equal work with unequal pay
Although the United States has had equal pay laws for women since 1963, largely a by-product of the civil rights and labour movement struggles, 43 years later women are still paid 77 cents for every dollar a man receives. African-American women and Latinas earn 70 cents and 58 cents less respectively. During the course of her working life, an average 25 year-old woman will lose more than $523,000 to unequal wage rates. If single working mothers earned the same wages as men, the poverty rate would be cut in half from 25.3% to 12.6 %. Women’s incomes would rise 17% on average. Married women would also help to boost their combined income by 6% and the poverty rates of married families would decrease from 2.1% to 0.8%.

Poverty statistics are calculated by gross income, not by net expenditures. If child care costs alone, averaging $340 a month for employed mothers, were factored into the government calculations, many more women would be considered poor. The unequal wage differential combined with disproportionately greater child care and family responsibilities, results in more women falling into poverty, and more easily than men.

Bush sharpens the knife for women and the poor
Since Bush has been temporarily rebuffed in his plan to privatise the social security programme, he now wants to drastically cut Medicaid – the government sponsored health program for the extremely destitute. Bush’s plan is to cut $20 billion in the next five years leading to the goal of $60 billion over the next ten years. These cuts would be equal to cutting care provisions for 1.8 million poor children or 350,000 elderly. The vast majority of the poorest who rely on government medical assistance are women and children. 70% of adult Medicaid recipients are women. Medicaid pays for more than 30% of all child-birth care in the US and one in four children have their only health insurance through Medicaid. In the absence of a national health service, 50 million poor Americans use Medicaid as their sole access to health care.

There is no mainstream political party that has the will to oppose Bush’s agenda. Democrats make loud noises and threaten to filibuster each time Bush introduces a new round of cuts, increases the military budget or appoints reactionary anti-abortion rights judges to the Supreme Court. Nonetheless, without a fighting class struggle opposition, the capitalist system succeeds in moving the goal posts each time a little further away from the working class and poor.

A campaigning socialist organisation
The US section of the CWI, especially our women comrades, have played a role in defending reproductive rights and safeguarding abortion clinics – a role quite separate from that of middle class feminism. We come armed with our own programme of national health care, child care, a housing programme, decently paid jobs and opposition to war.

We understand war as a woman’s issue. We make the links between the war in the Middle East and the domestic war in the US on the working class and poor, especially women. At times we have played a key role in pushing out the military recruiters from high schools and picketing the recruiting stations in working class communities, in order to make the military’s position uncomfortable and untenable.

We are involved in a grassroots campaign to stop big business from appropriating public park facilities in the South Bronx, which is the poorest Congressional district in the country. This effort has brought us into contact primarily with African American and Hispanic women who are fighting to stop Walmart and the Yankee sports stadium complex from devouring working class communities in the service of real estate gentrification.

A socialist alternative in the Belly of the Beast
It is vital that capitalism is defied and opposed in the wealthiest and most unrestrained capitalist country in the world. Our answer to war, unending attacks on the quality of life, the lowering of living standards and the growth of inequality promoted by capitalism is to build a socialist alternative. Our major objective is to recruit and train the future leadership of the socialist troops who will shake capitalism to its foundations. Many of the most vital forces in this battle will be women.