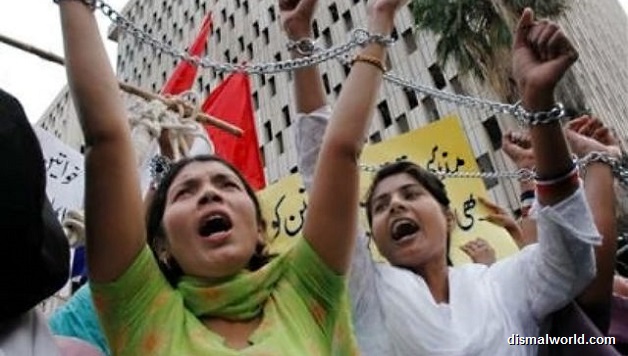 International Women’s Day will be celebrated on March 8th in Pakistan and other countries with large Muslim populations in a situation where Islamic religious parties and groups are still agitating against the blasphemous cartoons printed in a Danish newspaper.

Violent protests have been going on for weeks now. The issue has opened up another round of debate about Islam itself and Muslims being constantly under attack from the West. Islamic fundamentalists and religious parties are exploiting this situation to prove that Muslims are being oppressed by western powers.

But when it comes to the home front, those who are complaining about being oppressed by the West, turn out to be oppressors themselves in relation to women and children. Islamic fundamentalists and the religious right are responsible for the stark and horrific conditions faced by women in most of Muslim societies. They help the ruling classes to suppress women. They also portray the struggle for women’s rights as a western conspiracy against the “great traditions” and ”family values” of these religious parties.

They never utter a single word against the horrible conditions faced by women. They have never agitated against the gang rapes and other crimes committed against women. These “liberators” of Muslim societies never protested against the inhuman and brutal treatment of women by the Taliban and Al Qaeda in Afghanistan. For the ruling and religious elite, constituted essentially from the same male, relatively affluent segment of society which perpetuates the abuse of women, the plight of poor women is a non-issue. Women in Pakistan will celebrate this year’s International Women’s Day in a very difficult situation.

Still in the 21st century, in many areas in Pakistan, women are not allowed to go to school. In many areas of Baluchistan, Sindh, North West Frontier Province, southern Punjab, it is impossible to see a woman in the markets or on the streets. The majority of Pakistani women are facing the conditions of the dark ages with no social, political and economic rights.

For them, domestic violence, sexual harassment, rape, gang rape, injustice, forced marriages, honour killings and brutality are the realities of every day life. Discrimination against them is very visible in every field of life. 73% of women in the countryside labour in the rural economy, but no official report ever mentions their contribution. Women workers are cited as 23% of the total work force, but rural agriculture women workers are not included in that figure. In the textile sector women workers are 35% of the total work force. Nearly 3 million women are working as domestic servants and get anything between 500 to 2,000 rupees (£5 to £20) per month. These workers have no fixed working hours and time off in the week. Women workers in the private sector work 12 to 16 hours a day without any break. Compared with male workers, female workers get 40% less in wages.

The number of women workers in Pakistan’s work-force is on the rise, but this is not reflected within the labour movement because there are very few women in the trade unions. The male-dominated unions are not showing any interest in recruiting female members into the unions. Male-chauvinist union leaders discourage female workers.

Nearly 90% women in Pakistan face violence in the home. For the religious right and the dominating sections of the ruling elite, domestic violence is not a crime. For them, every man has the right to beat his wife, sister, daughter and even other female members of his family. Every one in three teenage girls is a victim of some kind of sexual abuse and torture. Every second girl is facing sexual harassment and unwanted sexual teasing.

The majority of domestic female workers are frequently subjected to rape and sexual abuse. Young girls between the age of 12 to 18 are especially likely to be subjected to rape and sexual abuse. The majority of these girls remain silent because the fear of a social backlash against their families. If someone dares to speak out against such abuse, she ends up facing police brutality and false charges of offences like theft in the household. Rapes in police custody are also on the increase. Forty four cases of custodial gang rapes have been reported in the last two months.

One of the worst situations is that of the female workers in the brick-making industry. In the 21st Century, whole families are still forced to work in a kiln for a just few thousand rupees. This is slavery of the worst kind. The women and young girls are often subjected to rape and sexual abuse.

Only one third of women are registered on electoral roles for elections. In many areas of the country, women are simply not allowed to vote.

Islamic fundamentalists and the religious right consider the struggle for women’s rights as a western conspiracy. For them, women are inferior to men, and their main duty is to please men. The religious right allows horrific and brutal oppression of women to continue in the name of Islamic culture. According to many well known Islamic scholars, these ‘traditions and customs’ are un-Islamic. But fundamentalists still defend them. They include the practice of honour killing which allows male members of a family to kill female members for having sexual relations without marriage. Vani is a custom in the semi-tribal districts of Punjab and North West Frontier Province under which girls are given in marriage to men of rival clans or tribes as a trade-off in deals to settle cases of murder and other blood feuds. (Sisters and daughters of accused murderers are given to affected families to release their brothers and fathers.) The girls are then treated as slaves in the rival clan. Forced marriages are rife and Karo Kari is widely practiced. This is the custom of husbands or other male family members killing married or unmarried female members on allegations of illicit relations. (Sometimes they kill both people involved.)

Islamic fundamentalists never raise their voice against these cruel and inhuman traditions and customs. Love marriage (i.e. without parental consent) is still a sin and a crime according to the religious elite. These religious parties and fundamentalist groups are against the repeal of the ’Hudood’ laws. These were introduced by the vicious right wing military dictator, General Zia-ul-Haq, in 1979 to viciously curb women’s rights. According to these horrific laws, a rape victim needs the evidence of four male witnesses in order to prove her claims in a court. If she fails to provide this, she will be charged with adultery (sex with her own consent) which means imprisonment for between 5 and 15 years!

Scandalously, several thousand rape victims are languishing in prison because of these laws, which were made by a dictator in his own interests but in the name of Islam. According to a recent report compiled by a professor Shaheen, a minister during the period from 1999 to 2002: ”95 % of cases registered under the Hudood Laws are false. Hudood laws have proved to be an instrument of personal vengeance. 99% of women implicated in cases under Hudood laws were proven innocent in trials by superior courts, but junior courts sentenced them for many years on a totally wrong basis. Recently the Federal Shariat (Islamic) Court issued instructions to all trial courts not to take cases involving women under these laws if they failed to prove rape according to their rules.”

These self-styled ”liberators of Muslims” are using religion to repress women and other sections of society. In their eyes, animals have more rights than women. At the recently held World Conference of the Islamic organisation Jamat-e-Islami in Peshawar, its head, Qazi Hussain Ahmad, accused the West of ”Conspiring to destroy the very basis of the Muslim family unit in the name of women’s liberation and gender equality in order to weaken and degrade our society. Women’s liberation is being promoted by those trying to subjugate the values of decency.”  This conference was organised to deliberate on the wearing of the head scarf and the burqa. Many of the conference speakers blamed women for the crimes committed against them.

The rise of fundamentalism is a direct threat to women’s rights as well as being a threat to workers’ rights.

More and more women in Pakistan are fighting back vigorously to end these slave conditions and cruel traditions. Poor rural women like Mukhtar Mai (a gang rape victim) defy all the odds to raise their voices against the atrocities committed against them. Other rape victims like Sonia Naz and DR. Shazia have stood up against the rotten system and its ’traditions.’

These women are challenging the male-dominated social and political system. But still it is not easy for women to raise their voice. This battle against feudalism, tribalism and fundamentalism is linked with the fight against the rotten system of capitalism. This battle cannot be fought on an individual basis. Working class women need organisation and unity. This fight is also linked with struggle of the working class to overthrow the capitalist system and to replace it with socialism.

During the Pakistan Telecomm strike against privatisation and the recent teachers’ struggle it was proved that female workers have great potential to organize and lead struggles. During the telecom strike women workers played an important role in organising in many places. Female workers remained solid throughout the strike. Women teachers are at the fore-front of the struggle against the government’s policies. Thousands of female teachers recently participated in an important protest demonstration. These struggles show the importance of women organised in the unions. Trade unions must include the demands of female workers in their programmes to attract the biggest number of potential members for the unions.

Role of the Socialist Movement

The Socialist Movement Pakistan (SMP) is fighting against all kinds of discrimination and exploitation against women. We are constantly campaigning against domestic violence and sexual harassment. Many activities have been organised to highlight these issues and to organise working class women. The SMP works mainly in working class communities and areas and its campaign against domestic violence has proved very successful. SMP members are also involved in campaigning against the Hudood Laws. In 2005 we organised three protest demonstrations against them producing and distributing many posters and leaflets. We aim in 2006 to step up this work to new heights.