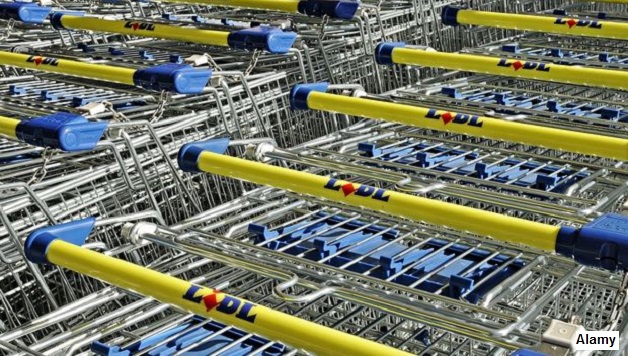 For over a year the German service trade union Ver.di has been attempting through a campaign to set up workers’ councils (Betriebsraete) in the retail chain, Lidl, in order to improve conditions of employment.

Women above all pay a high price for the exploitation and degradation at the discount stores  but they are putting up a fight.

My head was spinning and I thought, “Oh God, my house, my children. If I give notice myself, I will not even get unemployment benefit .” Then the controller dictated to me the text of the notice. In this situation I would have signed my own death sentence! This is how a former employee of the profitable retail chain describes how she was forced to accept “voluntary” redundancy. This is not just an individual case  it is a whole system.

System Lidl
Voluntary redundancies or abolition contracts are one way of getting rid of awkward workers. Mostly they are the ones who put up a fight against the terms of employment or who the company sees as having become too expensive.

Pressure and unpaid additional work – this is how the retail chain brings down its costs. Unpaid overtime is rather the rule than exception. Lidl officially pays the national rates – only not for the actual hours worked. Regularly employees report that they have to carry out unpaid clearing work and preparation long before and after the shifts. This is also a result of a chronic lack of personnel.

There are practically no regular breaks. Even a short walk to the toilet is a luxury. Due to the tight work targets (40 scans per hour at the counter) it is hard to take any breaks at all. On top of that there are different forms of control and monitoring. Most notorious are the test buys by supervisors. Sometimes members of staff are also asked to undertake such test buys. Another form of control is the search for stolen goods in staff members lockers, coats and bags, or even their cars. Video cameras have been installed without telling staff.

The Lidl enterprise
Everyone knows the name Lidl, but the enterprise itself remains largely a stranger. Behind the discount market chain is the Schwarz-group. Information about the group structures or business accounts does not get published. In addition, the Schwarz-group has set up a network of 600 companies.

Nevertheless, one thing is certain: the Schwarz-group and Lidl are successful. The Schwarz group had a turnover of more than 36 billion in 2004, with the trend going upwards. The company is by now the biggest and most successful discount retail chain in Europe. In Germany, where Lidl employs 40,000 workers, only Aldi beats them.

Workers’ councils? No, thanks!
In the stores, the mostly male branch managers conduct a hard regime. Most employees are women – at the tills up to 90%. This is only possible because there are no workers representatives in most branches. Workers councils only exist in seven of the 2,600 German branches of Lidl. The campaign by the trade union is seeking to change that. However, where employees attempt to set up workers councils, the company responds very harshly. In a Munich branch, the organizer of the elections for the committee was sacked because she supposedly offended the acting branch manager. In the southern German town of Calw, Lidl even closed a profitable store because an active workers’ council existed. Now employees and unions are preparing for the workers council elections in the Spring. It is not certain whether this will be successful.

To the general public
Ver.di began the campaign at the end of 2004 with the publication called The Lidl black book. In it the terms of employment at Lidl are described and the workers themselves get a chance to speak. This caused a wave of responses from Lidl employees and debate in the media. Since then the trade union has tried to engage with the employees by visiting Lidl branches and by supporting staff with the setting up of workers councils. In addition, they are organizing so called customer weeks. These entail protest rallies outside the supermarkets, where the customers get informed about the background of the campaign and the terms of employment at Lidl.

Opposition is possible
There are few areas of work where it is more difficult to organize opposition than in the retail business, with many disorganized and temporary employees spread over many sites. There are seldom more than three permanent employees in one Lidl shop. Most women work part time, which splits the staff further. Because of the longer and longer store opening hours, to which unfortunately the trade union leaders agreed, the women spend more and more evening hours in the stores and it is difficult for them to find the strength for struggle.

Nevertheless, colleagues at other discount markets like Schlecker have shown that it is possible even under these conditions to set up workers councils and to organize into the union. Their solidarity with Lidl colleagues is especially important, as they also take part in visiting and organizing.

International day of solidarity
International Women’s Day on 8 March is an important opportunity for wider and, above all, international protest. The international commercial union organisation UNI (Union Network International) plans to organize action at different European supermarkets. An internationalization of the protests would be an important step towards increasing the pressure on the company. It would be especially important to include the Lidl workers from Belgium, Finland or Norway, who are already very well organised, and to raise the prospect of international strike action.