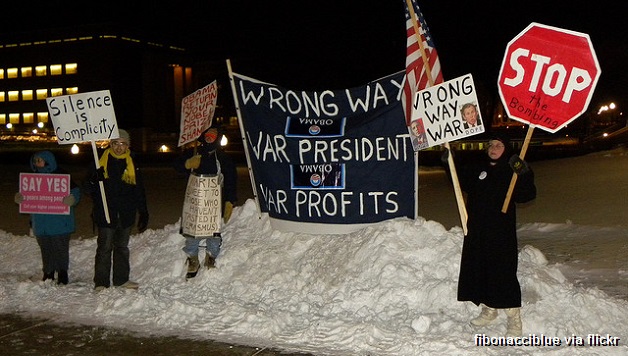 Day by day, the crisis in Iraq deepens. As we go to print, the official death toll of U.S. troops is over 2,000. Meanwhile, estimates of war-related Iraqi deaths are upwards of 100,000. War profiteers like Halliburton are seeing their stock prices triple, while U.S. taxpayers fork over almost $6 billion per month for an occupation the majority of the population opposes.

The November 2 walkouts and actions organized by Youth Against War and Racism chapters across the country are a step forward for the student antiwar movement. The mobilization for the walkout in participating areas expanded the antiwar movement into dozens of new schools, reaching tens of thousands of youth with our leaflets and ideas, bringing thousands of young people into political activity for the first time, and establishing a tradition of mass direct action in our schools.

But one day of action will not be enough.

We need to build a sustained movement beyond November 2. We need to take all the energy created by the walkout and channel it into protests every time military recruiters come to our schools.

Over the coming year, it is possible we can succeed in making a number of schools, even entire districts, military-recruitment-free zones. Such a victory in one city would be national news and would help inspire high school students across the country (see article “How to Kick Recruiters Out of Your School”).

The key task now is to build active YAWR chapters in our schools and to prepare for even larger mass actions in the coming period.

March 19 will mark the third anniversary of the invasion of Iraq and will likely be commemorated with another round of major antiwar protests. YAWR should take the lead in organizing actions even more powerful than the November 2 walkouts.

We cannot rely on corporate-sponsored politicians from either party to put an end to this war. A sustained mass movement on the streets, in our schools, and in our workplaces is the most powerful way we can force the ruling elite to end the occupation.

Youth Against War and Racism is a growing national network of youth activists and student groups. YAWR is organized around the following Points of Unity:

A Brief History of YAWR

Youth Against War and Racism began in the fall of 2004 when three high school members of Socialist Alternative started to organize against military recruiters at Kennedy High in Bloomington, Minnesota. When their principal tried to ban them from setting up an antiwar table against military recruiters, the students waged a successful public campaign defending their free speech rights.

As news of this victory spread, YAWR quickly grew to other high schools across the Twin Cities. Student activists with Socialist Alternative along with independent activists started YAWR chapters in other cities last spring.

YAWR’s call for student walkouts on November 2 was endorsed by Cindy Sheehan, Noam Chomsky, and Howard Zinn, to name a few. YAWR now has the potential to grow substantially and become a key force in the student antiwar movement in the areas where it is active.