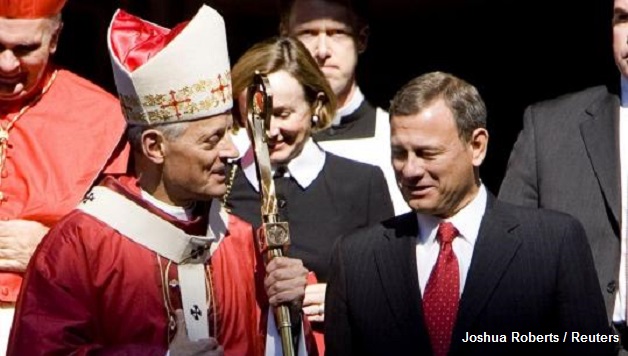 Bush’s nomination of hard-line conservative John Roberts to the Supreme Court represents a real threat to the rights of women, workers, and people of color.

Roberts is a dyed-in-the-wool, right-wing conservative. As a lawyer for the Reagan administration, he wrote in internal memos that the idea of women receiving equal pay for equal work was “staggeringly pernicious” and “anti-capitalist.”

While working for President Bush Sr., Roberts argued before the Supreme Court that Roe v. Wade “was wrongly decided and should be overruled” and that there is no “fundamental right to an abortion.”

Ever since Bush revealed Roberts as his choice for the Court, Christian Right organizations have sung in chorus their praises for Roberts. Operation Rescue, best known for bombing abortion clinics, asserted that the pro-life movement now has “an unprecedented opportunity to finally restore moral sanity in America… Through a ‘peaceful coup’ in the Supreme Court, which would lead to the eventual overturn of Roe v. Wade.”

The more that is revealed about Roberts’ history and views, the more it becomes clear what a threat he is. There is an urgent need for mass protests to stop the Senate from confirming Roberts and check the religious right’s offensive.

If the Senate confirms Roberts’ nomination, it will shift the Court’s balance further to the right. It would likely tip the Court toward even further restrictions on women’s reproductive rights. Other key questions at stake include the legality of the Patriot Act and other “anti-terrorist” laws, separation of Church and State, criminal justice issues, civil rights, gay rights, and labor and environmental regulations.

And the fight over this confirmation is just the first battle in a larger war for the Supreme Court. It is likely Justice Rehnquist (who has thyroid cancer) and Justice Stevens (who is 85) will step down from the Court during Bush’s presidency. In this context, the threat of Roe being overturned is real.

To block Robert’s confirmation, tame lobbying of Senators will not work. What can bring real pressure to bear on the political establishment are massive local and national demonstrations, which the main women’s, labor, civil rights, and antiwar organizations should urgently organize. Specifically, the organizers of the 9/24 antiwar demonstrations, which are likely to be massive, should include the demand of blocking Roberts as part of the demo to link the war in Iraq with Bush’s war at home and oppose repressive “anti-terrorist” legislation.

While there is no guarantee mass protests would be able to stop Roberts’ confirmation, they would send a warning that we are prepared to fight and help prepare the ground for further struggles. However, if Roberts is allowed to sail through without mass protests, it will only further embolden Bush and the Christian Right. Seeing no mass opposition or struggle, they would feel safe in stepping up their offensive on women, people of color, and workers. Bush would be more confident to nominate an even more extreme right-wing nominee for the next Supreme Court vacancy.

The willingness of people to struggle to defend women’s abortion rights was unmistakably illustrated on April 25, 2004. On that day, over a million women and men protested Bush’s wrongly-worded “partial-birth” abortion ban in Washington, D.C. in the largest protest in U.S. history.

Protests against Roberts should also be linked to building a mass movement to defeat the wider corporate agenda of Bush and his backers in the Christian Right. With Bush’s support rapidly falling, this would draw even more people onto the streets. We need to explain that these are the people trying to force “family values” down our throats. However, their version of family values means sending your family members to die in Iraq, you working for Wal-Mart wages with no healthcare, while they rake in billions in profits. Instead, we need to call for money for jobs and education, not war; free healthcare and child care; and free and accessible abortion.

Unfortunately, the main women’s organizations that many are looking to lead a campaign to stop Roberts’ appointment, are not effectively mobilizing people. Instead of calling for mass protests, these groups are putting all their faith in the Democratic Party and lobbying the Senate.

For example, the front page of NARAL’s website has an online petition visitors can fill out and send to their Senators. Nowhere on this website, however, is building a movement in the streets even mentioned. Similarly, NOW’s website urges people to write their Senators. On NOW’s list of “What you can do to make a difference,” only point 11 calls for people to participate in protests against Roberts.

The Democratic Party has pressured the liberal leaders of the main women’s organizations to keep the struggle against Roberts within “safe” boundaries, fearing mass protests would shine a spotlight on questions like abortion and gay marriage, which they cynically calculate would alienate “swing voters.” But it is exactly that type of unprincipled refusal to boldly combat the religious right that has allowed them to shape the public debate over the past period.

The Democrats have failed to energetically campaign to expose Robert’s right-wing record and educate the public about the threat he represents. This has led to confusion among many about where Roberts stands on issues. This shows why we need to build a powerful independent movement that can answer the corporate media’s lies and explain why it is vital to block Roberts. Massive demonstrations would play a key role in cutting through the confusion surrounding Roberts’ nomination and raising people’s confidence to fight.

No trust can be placed in the Democratic Party to uphold abortion rights or any of our other rights. It has only been through mass struggles of ordinary people that we have won and defended abortion, civil, labor, and environmental rights. Through building a mass, united movement against Bush’s vicious, right-wing assault, we can defend and extend these rights.