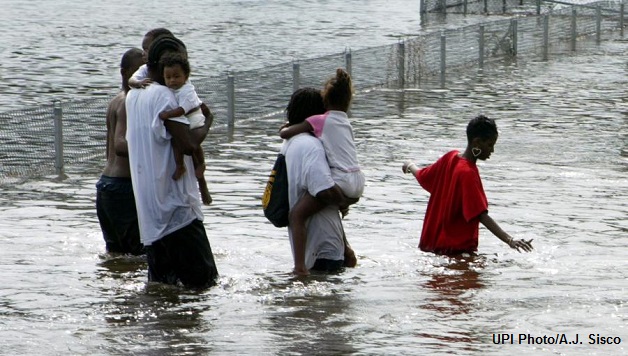 Hundreds of thousands are left homeless. Tens of thousands have been shipped to Texas as refugees. Entire communities have been reduced to rubble. The city of New Orleans will likely be uninhabitable for months. The death toll from Katrina is certainly in the hundreds, and it will probably reach the thousands. Some commentators say this was all unavoidable, but that is a lie.

Even the Wall Street Journal printed an article entitled, “Evacuation was a model of efficiency – for those who had a car.”

For the over 100,000 poor residents of New Orleans without any access to cars, there were few options. You could cough up the few pennies you have to take a bus out of town, leaving your belongings and community behind in order to end up sleeping on the street in some other city. Or you could go to the Superdome, where over 23,000 people decided to wait out the storm, only to eventually be shipped (after a dangerous evacuation) to the Astrodome in not-so-nearby Houston, Texas.

Or, as thousands of people decided (or were forced to decide), you could wait it out on your roofs or in your attics, surrounded by destruction and floating dead bodies; you could only hope not to become one of those floating by. The working class and poor have the least-stable housing, so it is disproportionately their houses that were destroyed.

New Orleans (and other places throughout Louisiana, Mississippi, Alabama, etc.) has no clean drinking water. Desperate working-class and poor people have resorted to “looting” in order to get a hold of food. New Orleans cops, instead of focusing on getting people food, water, and shelter, have been sent around to harass, threaten, and arrest those who have been forced to take from stores to feed themselves and their families.

As this crisis hits, over 6,000 National Guardsmen from Louisiana and Mississippi are in Iraq helping the U.S. ruling elite’s attempts to occupy that country for the benefit of Halliburton, Texaco, and Bechtel. Theoretically, the National Guard is supposed to deal with domestic emergencies (they’re often used to break strikes). If there was ever a time that real, dedicated civil servants were needed for a domestic emergency, this is it.

Clearly, in the minds of the billionaires who rule this country, war and profits come before relief for ordinary people faced with the most difficult of situations. Partially due to the huge amount of resources devoted to the Iraq war, state and local governments have implemented vicious budget cuts that have caused, amongst other things, less money to be devoted to dealing with natural disasters.

Recent years have seen a marked increase in the number of hurricanes and other major natural disasters, some of which the probably the result of climate change. Of course, it would have been impossible to prevent all the damage done by Katrina, but much of it was preventable.

New Orleans has a record of flooding during hurricanes. The city is built below sea level, and it is kept from constant flooding by a system of levees and pumps. The levees are set up to withstand some level three hurricanes, but Katrina was a level four hurricane. There is plenty of technology to create levees that withstand even level five hurricanes.

In an article in New Orleans CityBusiness from February 7, 2005, the U.S. Army Corps of Engineers stated that millions were needed for flood and hurricane protection in New Orleans, but “most projects will not be funded in the President’s 2006 fiscal year budget.” From 2001 to 2005, government spending on projects to protect New Orleans from massive flooding dropped drastically from $147 million to $82 million.

Study after study has shown that working-class and poor areas, like the destitute Lower Ninth Ward of New Orleans, are hit the worst by flooding due to the lack of investment in prevention.

They claimed there was no money for prevention, but United Airlines was just given billions of dollars in corporate bailouts from the federal government. And they can’t fund projects to prevent inevitable disasters? Ridiculous.

With big business controlling the relief strategy, the situation looks bad for the poor. Even if the water level subsides, the dead bodies, rancid food, and raw sewage would lead to a massive outbreak of sickness and disease for anybody who goes back to the region.

The U.S. economy and the world economy will be seriously affected by these events. Working people have already been hit hard. Workers can’t let big business put the burden of the economic problems on our backs.

Bush and his gang are worried. Anger is mounting against Bush on many issues, ranging the war in Iraq, the unstable income and his massive tax cuts for the rich. Already suffering his lowest ever approval ratings Bush fears that this disaster will further undermine him as the realization sets in that his government cut the spending on flood defenses and sent the National Guard to Iraq. Hurricane Katrina could be a turning point in which passive anger turns into active opposition.

We should demand worker and community control of all relief resources. We should demand billions of dollars in spending on relief from and prevention of natural disasters. The Federal government must provide full unrestricted maintenance for all those who have lost their jobs, there must be an emergency program to build good public housing for all those now homeless, interest-free loans must be given to small businesses and farmers to enable to rebuild and the States must be given Federal finance to replace their lost tax income. We need to organize mass movements of demonstrations, strikes, and direct actions to reverse the budget cuts, tax the rich, and get funding for services like universal healthcare, decent education, and public works programs that provide decent jobs.

The big corporations don’t want to be taxed to pay for our social programs, so they pay off politicians to pass laws and budgets that benefit the super-rich. We need a party that represents working people, a party with a program to end poverty, war, racism, and environmental destruction. We need a workers’ party with a socialist program that will fight big business to the very end.

An Action Program to organize a working class response to the disaster: