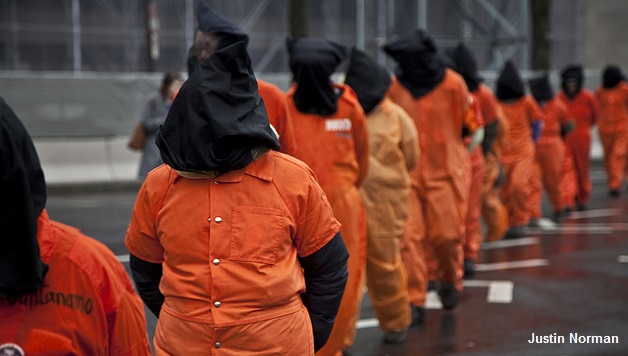 The prisoner spent several days naked in a dark room. Each day, his captors would come and beat him, sometimes until he lost consciousness. They spit on him and made him bark like a dog. One day, they tied his hands to the door and made him lie on his stomach while they jumped on his back and legs. One soldier peed on him and sodomized him with a broomstick while the others laughed and took pictures.

These events took place in the now-infamous Abu Ghraib prison in Iraq. But they could have happened at any one of the many secret and not-so-secret detention centers the United States government runs around the world.

Each day seems to bring a new revelation of torture and other mistreatment committed by U.S. soldiers and military police in the name of fighting terrorism.

Human rights groups have reported at least 30 deaths of prisoners in Afghanistan and Iraq. The Pentagon admitted that interrogators at Guantanamo Bay, Cuba had stomped on the Qur’an and splashed it with urine, enraging Muslims around the world.

The International Committee of the Red Cross complained of “ghost detainees” being held in undisclosed locations with no record of their imprisonment, so that human rights groups couldn’t monitor their treatment.

Amnesty International recently caused a storm of controversy when it called Guantanamo “the gulag of our times.”

Kayla Williams, a former Army sergeant stationed in Mosul, far from the Abu Ghraib prison complex, has recently written a book called Love My Rifle More than You which recounts how she was instructed to sexually humiliate a prisoner who was brought to her stark naked.

Less well known is the U.S. government’s practice of “extraordinary rendition” – secretly shipping prisoners to countries such as Saudi Arabia and Syria to be interrogated and tortured.

Maher Arar, a computer engineer with Canadian and Syrian citizenship, told the Washington Post how he was snatched from JFK airport in New York by U.S. authorities, who sent him to an intelligence prison in Syria. There he was held in a tiny dark cell, beaten with electrical cords, and forced to sign a false confession.

The rampant abuses have embarrassed even big business politicians who support the “war on terror.” Several members of Congress, including Democratic Senator Carl Levin and Republican Senator Lindsey Graham, have begun to call for an independent commission to investigate the issue.

Some Democrats are demanding that Guantanamo Bay be closed. On the other hand, after a recent visit to Guantanamo Bay – which prison administrators knew about in advance and could prepare for – Democratic Senator Ed Case from Hawaii remarked that the prison was “being run well” and conditions were “as humane as possible under the circumstances.”

The Pentagon, of course, claims that no independent investigation is necessary; the generals and bureaucrats responsible for this horror want to be able to police themselves. The strategy of the ruling class is to paint the atrocities at Abu Ghraib and elsewhere as the work of a few bad apples who were not following military policies.

While several enlisted soldiers faced trial for torturing prisoners at Abu Ghraib, their superiors, as well as top Defense Department officials, got off scot free.

But in reality, as Mark Danner points out in his book Torture and Truth: The Lessons of Abu Ghraib, the torture there stemmed from a logic laid down in government documents that date back years before the abuse occurred, and were sanctioned at the highest levels.

In January 2002, then-White House counsel Alberto Gonzalez sent a memo to President Bush saying that the country was fighting a new kind of war and the Geneva Conventions on Treatment of Prisoners of War, which required humane treatment of detainees, was “quaint” and “obsolete.”

The administration used this rationale to label detainees in Guantanamo “enemy combatants” who could be detained indefinitely. They could file appeals, but only to a military tribunal where evidence obtained under torture was admissible. Prisoners were routinely tortured to gain information.

In August of 2003, Major General Geoffrey Miller, who would later become the commander at Abu Ghraib, prepared a report suggesting that the methods used in Guantanamo be imported to Abu Ghraib “to rapidly exploit internees for actionable intelligence.”

A military intelligence captain quoted in Danner’s book put the issue more plainly in an email to his colleagues: “The gloves are coming off gentlemen regarding these detainees. Col. Bolz has made it clear that we want these individuals broken.”

The Role of Torture

It is commonly thought that torture is aimed at extracting information that cannot be obtained by other means. The truth is that torture has very limited value as an “interrogation technique.”

Its real purpose is to terrorize the wider population, particularly those who would be inclined to resist oppression. This is why it is so widely used by dictatorships around the world.

Torture has always been a part of imperialist war. It is a sign of weakness on the part of the ruling class, not of strength. An occupying army, like the U.S. army in Iraq, will resort to torture when it faces a mass resistance.

That Abu Ghraib and Guantanamo are not “aberrations” is brought home by the re-release of the documentary Winter Soldier, made in 1971, in which recently-returned Vietnam veterans recalled in horrifying detail abuses they witnessed or participated in, always with the knowledge and consent of higher officers.

The massacre at My Lai, when hundreds of Vietnamese civilians were rounded up and killed, many after being raped, should be remembered whenever certain liberals say that current abuses have sullied America’s “fine traditions.” The truth is that imperialist occupation is always a dirty business.

It should also be pointed out that sexual humiliation of prisoners and other degrading and inhumane practices are also widespread in the U.S. prison system, which houses more prisoners than any other country on earth. What is being done in Iraq is a sharper form, therefore, of what is being done here “at home.”

We call for the closing of Guantanamo Bay and all of the United States’ secret detention centers. We are against the sending of prisoners to countries that openly support torture.

Some Democrats may be critical of the abuses that have occurred, but the Democratic Party leadership is still committed to “staying the course” in Iraq and that means they won’t push the issue of torture. Abu Ghraib and Guantanamo were never once mentioned by John Kerry during the presidential election campaign last year.

Only a mass antiwar movement can force this issue back to the fore as part of the wider struggle to end the occupation of Iraq and Afghanistan.