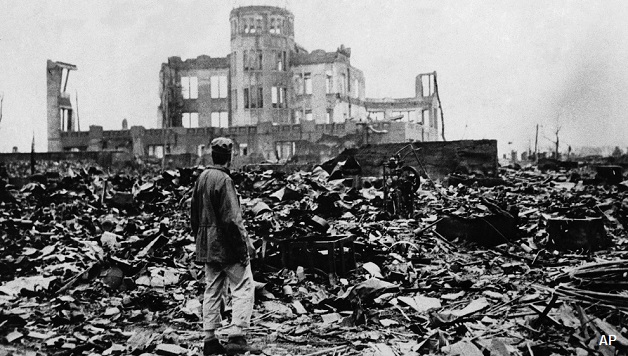 On August 9, a second atomic bomb was dropped on Nagasaki, killing over 70,000 and injuring a similar number or more. The atomic bombs also left a terrible legacy of traumatic social damage and genetic deformations.

Hiroshima and Nagasaki will forever stand out as symbols of barbaric mass warfare. The nuclear attacks opened a new dimension of destruction. But they were the culmination of ruthless measures already deployed against innocent civilians in Germany and Japan.

U.S. imperialism, with the support of Britain and other capitalist powers, had ushered in a new era of weapons of mass destruction. Fascist regimes – Germany, Italy, and Japan – that came into conflict with the Western powers and the Soviet Union perpetrated the most barbarous crimes against humanity, including genocide.

Nevertheless, the strategy of mass terror against civilian populations carried out by the Western powers, particularly in the closing stages of World War II (1939-45), were also monstrous crimes against humanity.

In the closing stages of the war against Germany, the western powers (the allies) adopted a policy of “strategic” or “morale” bombing. The strategy was aimed not so much at backing up military operations or destroying Hitler’s military machine as at the blanket destruction of cities and terrorization of the civilian population.

The Nazi regime’s bombers had undoubtedly unleashed massive destruction on the people of Warsaw, Rotterdam, London, Coventry, and other cities. But in the last two years of the war, the U.S. and Britain took the strategy much further.

Allied carpet-bombing during 1943-45 engulfed cities like Hamburg, Bremen, Dresden, and Berlin in ferocious firestorms, incinerating 600,000 people – overwhelmingly civilians. The heaviest bombing was in the last few months of the war, when most of Germany was already in ruins and Hitler’s military machine was cracking.

“Strategic bombing” was the brainchild of Churchill’s air force commanders, notably Trenchard, Portal, and the notorious ‘Bomber’ Harris. All four of them had been involved in attempts to put down uprisings of Arabs and Kurds in Iraq (1920) and Aden (1934) through bombing and poison gas attacks.

Churchill and his commanders brushed aside advice from scientific advisors that the targeted bombing of transport infrastructure would be more effective in defeating Nazi Germany. These servants of the ruling class wanted savage revenge on Germany. They made no distinction between the Nazi regime and the German people, who were the first victims of Hitler’s fascist dictatorship.

In the strategy of U.S.-British imperialism, Germany’s civilian casualties were not “collateral damage” – they were the actual targets of the allied offensive. And it was the same in Japan. The urban population, overwhelmingly working class, paid a terrible price for the military aggression of their ruling class.

Why Did the U.S. Nuke Japan?

President Truman and his top officials and military commanders argued that the use of nuclear weapons was essential to bring the war against Japan to a speedy conclusion and to save the lives of a million U.S. troops. With the high U.S. casualties from the capture of the Japanese islands of Iwo Jima and Okinawa, this not surprisingly struck a powerful chord with most Americans.

They did not reveal, however, intelligence assessments predicting the Japanese regime would soon surrender. The official U.S. Strategic Bombing Survey later concluded, “It is the Survey’s opinion that certainly prior to December 31, 1945, and in all probability prior to November 1, 1945, Japan would have surrendered even if the atomic bombs had not been dropped, even if Russia had not entered the war, and even if no invasion had been planned or contemplated.”

Sections of the Japanese regime were exploring terms of surrender with the allies, particularly through talks with the Soviet government. The U.S. was demanding unconditional surrender. The Japanese ruling class wanted an assurance that the emperor, Hirohito, would not be tried as a war criminal and would be allowed to remain as emperor under U.S. occupation. (They were not so concerned about safeguarding the rights and conditions of the Japanese people!) Truman rejected this condition, though later readily accepted it – after dropping two nuclear bombs.

Why was U.S. imperialism so determined to use nuclear weapons? The historian Herbert Feis sums it up. The rush to use the bombs, only a month after the first test in the New Mexico desert, was driven by “the impulse to punish, the inclination to demonstrate how supreme was [U.S.] power…”

The demonstration of U.S. power was particularly aimed at the Soviet Union. In accordance with earlier agreements between the allies at Yalta in February 1945, Stalin was committed to launching a military offensive against Japan on August 8.

By mid-1945, however, the underlying antagonisms between the “allies” had come to the surface. Threatened by deadly fascist enemies, U.S.-British imperialism was forced to rely on the Soviet Union for military support. At the end of the European war, however, the Stalinist regime – a bureaucratic dictatorship ruling over a centrally-planned economy – occupied Central and Eastern Europe, forming a massive counterweight to the power and influence of Western capitalism.

The last thing Truman and Churchill wanted was the occupation of Japan by Soviet military forces. They were determined to preempt Stalin’s military offensive, dropping the first atomic bomb on August 6 and a second on August 9. This enabled U.S. forces under General MacArthur to occupy Japan.

Capitalist leaders continue to justify the use of nuclear weapons against Japan. But the historical record is clear. Hiroshima and Nagasaki were not necessary for U.S. imperialism to rapidly defeat Japan. Atomic bombs, killing hundreds of thousands of people, were ruthlessly used purely to demonstrate U.S. power.

The majority of the top scientists (124 of 150) working on the “Manhattan Project,” the massive U.S. scientific-industrial effort to build nuclear weapons, came out against the use of an atomic bomb against Japan. Many favored a public demonstration explosion, giving the Japanese government time to surrender. While it was believed that Hitler could be preparing nuclear weapons, the scientists felt it was justified to work on a U.S. bomb.

After the defeat of Germany, however, when it became clear the Nazi regime had not been able to develop nuclear capacity, they considered nuclear weapons no longer had any moral justification. The political representatives of the U.S. ruling class brushed aside these scruples.

In a letter to Truman, a group of scientists warned that the use of the atomic bomb would trigger an unlimited race for nuclear armaments. Their warning was amply borne out. In response to the U.S. development of the even more destructive hydrogen bomb and intercontinental ballistic missiles with nuclear warheads, the Soviet Union developed its own massive nuclear armory.

Smaller powers, like Britain, France, and China, followed suit. The powers accumulated enough nuclear warheads to wipe out the planet many times over. This weaponry absorbed a huge share of available resources for science and technology, which could have been directed to socially useful projects.

Trying to justify nuclear weapons, Western leaders argued that the balance of nuclear power, with mutually assured destruction, ruled out war. But while nuclear weapons ruled out a world war between the superpowers, they did not prevent an endless series of “small” wars, which were often manipulated by the powers for their own ends. Between 1950 and 1989, these wars claimed the lives of between 20-30 million people.

After the collapse of the Soviet Union in 1991, Western leaders claimed there would be a “peace dividend” with the reduction of nuclear stockpiles and armament spending generally. True, the number of nuclear warheads has been reduced. But there are still around 27,600 warheads (2,500 on ‘hair-trigger alert’) with a destructive power of 5,000 megatons (equivalent of 5,000 million tons of TNT).

And whereas the Cold War produced a relatively stable relationship between two superpowers who dominated rival blocs of regional powers and client states, today there is a much more unstable, dangerous situation.

Over 40 states have nuclear weapons or the capacity to rapidly produce them. Superpowers may regard nuclear weapons as the absolute last resort. But can it be totally ruled out that regimes like North Korea or Pakistan, given regional conflicts and internal upheavals, would not resort to a nuclear strike against their enemies?

The major powers claim they are committed to arms reduction and nuclear non-proliferation. But this is completely hypocritical. Even now, the U.S. is developing a new generation of tactical nuclear weapons.

In 1945, James Franck, Leo Szilard, and other Manhattan Project scientists warned: “protection against the destructive use of nuclear power can come only from the political organization of the world.” Sixty years later, the failure of the United Nations and numerous international “arms control” treaties to stop nuclear proliferation shows this to be a utopian dream under capitalism. The competitive drive of national capitalist states for ever-greater wealth and power makes arms accumulation and wars inevitable.

“The political organization of the world” requires a world-wide change in the social system: democratic economic planning instead of the anarchy of the market. Socialist democracy instead of the predatory rule of capitalists and landlords. Only the democratic control of society by the working class can provide the basis for real international cooperation and global planning.

Hiroshima and Nagasaki are perpetual reminders of the barbarous, destructive potential of capitalism. Today, as a result of deepening global crisis, the world has become a much more volatile and dangerous place. The alarming proliferation of nuclear weapons makes socialist change even more urgent.