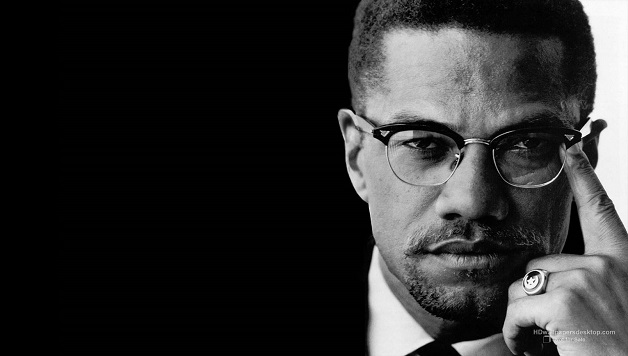 February 21 marked the 40th anniversary of Malcolm X’s assassination. Only 39 years old at the time of his murder, Malcolm X would have turned 80 on May 19 of this year.

Today, while the mass mobilizations of the civil rights movement in the 1960s did away with legally-codified racism, in the 40 years since Malcolm’s death the underlying economic roots of racial inequality have not gone away. In fact, the social conditions facing many African Americans have worsened.

According to the U.S. census bureau, the official poverty rate for White Americans is a high 8.1%. However, the rate for Black Americans is an enormous 24.1%. In the U.S., which has the world’s largest imprisoned population both in absolute numbers and as a percentage of total population, black people account for just over 12% of the total population but over 44% of the prison population.

More Than a Nationalist

Malcolm X is most widely known as a leader of the black nationalist Nation of Islam. What is less known is that in the last year of his life Malcolm left the Nation and his political views changed drastically.

As the civil rights movement began to pick up steam in the early 1960s, Malcolm’s will to participate in politics ran up against the conservatism of Nation leaders who wanted to remain a mostly religious and cultural organization. By 1964, the corruption of Nation leader Elijah Muhammad and developments in Malcolm’s political thinking led him to leave the organization that had trained him as a leader and an organizer.

On his trip to Africa in 1964, Malcolm met non-blacks who he considered “true revolutionaries dedicated to overthrowing the system of exploitation that exists on this earth by any means necessary.” Reflecting on his experiences in foreign countries, Malcolm said, “I had to do a lot of thinking and reappraising of my definition of black nationalism. Can we sum up the solution to the problems confronting our people as black nationalism? And if you noticed, I haven’t been using the expression for several months.”

Malcolm’s Development as a Revolutionary

During the last year of his life, Malcolm moved towards recognizing the system of capitalism as the root cause of the oppression and indignities suffered by African Americans. Though he never rejected Islam, he stopped doing his political organizing on a religious basis. In June 1964, he founded the secular Organization of Afro-American Unity.

At the OAAU’s founding rally, Malcolm stated “we want equality by any means necessary.” In a 1964 speech, he said “you can’t have capitalism without racism.” Malcolm never became a socialist and he never broke with some of the conservative ideas he had acquired early in his life. However, at the time of his death the trajectory of his political thought was towards anti-capitalism, internationalism, and revolution.

Those who misrepresent Malcolm X as an anti-white racist do so only by ignoring much of what he actually said.

In January 1965, he said “I believe that there will ultimately be a clash between the oppressed and those that do the oppressing. I believe that there will be a clash between those who want freedom, justice, and equality for everyone and those who want to continue the systems of exploitation… It is incorrect to classify the revolt of the Negro as simply a racial conflict of black against white, or as a purely American problem. Rather, we are today seeing a global rebellion of the oppressed against the oppressor, the exploited against the exploiter.”

Malcolm’s identification of the economic and political system of global capitalism as the underlying basis of racial oppression and his arguments in favor of international political struggle anticipated the worldwide growth of revolutionary movements in the late 1960s.

Malcolm was a leader with serious credibility among the most militant sections of African Americans and with an uncompromising commitment to revolutionary change. Any movement he built was not likely to be placated by tokenism or co-opted into big business political parties. Malcolm’s founding of a secular, radical political organization prepared to work within the growing civil rights movement represented a real threat to the establishment.

Only half of the 40,000 pages in FBI files on Malcolm X have been made public. Manning Marable, a prominent historian who will soon complete a new biography of Malcolm based on previously unknown material, believes evidence points clearly toward New York City Police and FBI involvement in Malcolm’s assassination (Democracy Now interview, 2/21/05). Marable’s biography, to be published in 2008, also promises to shed important new light on Malcolm’s political trajectory at the end of his life.

Opposition to Imperialism and Independence From the Democratic Party
Having learned first about the government’s vicious treatment of black people in the U.S., Malcolm could not help but recognize similar underlying racism in the U.S. government’s interventions overseas.

A man who had always survived by his wits, Malcolm understood why President Lyndon Johnson was sending “peace corps to Nigeria and mercenaries to the Congo.” He judged U.S. interventions around the world according to the material ambitions of the ruling class rather than the things that politicians said to drum up support. He spoke out against colonialism and apartheid in Africa, the U.S. interventions in the Congo and in Vietnam, and in support of the Cuban Revolution.

Forty years later, there is a lot to learn from the way Malcolm X spoke out and organized against U.S. imperialism. In Malcolm’s time, the official, reformist leadership of the civil rights movement at first supported or refused to publicly oppose the Vietnam War (or U.S. interventions in the Congo and the Dominican Republic). Malcolm’s opposition was uncompromising, even when public opposition to the war initially confined him to a small minority.

Mainstream civil rights leaders were not prepared to take a principled stand and educate blacks and workers about how these wars and foreign interventions were not in their interests. Instead of leading, it was only after the anti-war movement exploded that some of them followed behind and started campaigning against the Vietnam War.

Following 9/11, the civil rights establishment and liberal black Congressional Democrats played a similarly rotten role. Maxine Waters, John Conyers, Bobby Rush (who was previously a Black Panther leader), Charles Rangel, to name a few, all lined up behind Bush and supported the Afghan War and the “war on terrorism.” Again in April 2003, leading Democratic members of the Congressional Black Caucus voted to spend $78 billion for the wars in Iraq and Afghanistan.

Malcolm X clearly explained that to win victories from a hostile system, the African American community needs to build a militant and principled movement which cannot rely on either party of big business.

In stark contrast to the leaders of liberal civil rights organizations, he never tried to conceal the role of the two main capitalist parties that continue to dominate U.S. politics. In January 1965, Malcolm said that “the Democratic Party is responsible for the racism that exists in the country, along with the Republican Party.”

While the Democratic Party continues to cast itself as the party of blacks, latinos, and the poor, it has kept up the Iraq war and kept down the minimum wage. Malcolm knew well that the Democratic Party has a long history of sending African Americans to war and to prison, while cutting social welfare programs.

In the last election, black Democrats like Al Sharpton and Jessie Jackson, who pose as natural leaders of all African Americans, supported John Kerry despite his support for big business policies and his failure to advocate a program which represented the interests of African Americans and working people. The AFL-CIO leaders also gave over $160 million of workers’ money to the Kerry campaign.

Blacks, latinos, and workers still need to remember Malcolm’s observation that “you put the Democrats first and the Democrats put you last.” In the process of building a working-class political force that can take on big business and do away with racism, we should learn from the example and experience of fighters like Malcolm X.

Their Courts Won’t Save Us: Women and Working People Must Lead the Fight Against Right-wing Attacks