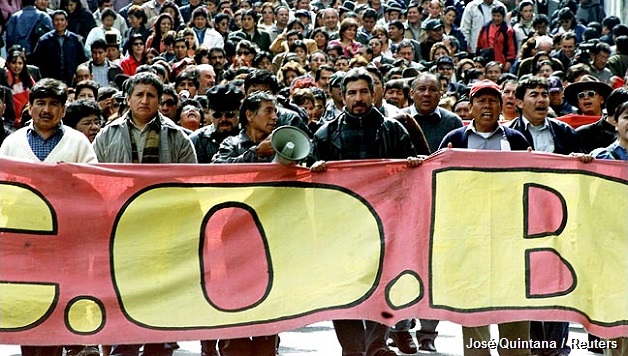 After three weeks of strikes, protests, and blockades, the working class and peasants of Bolivia forced the resignation of President Carlos Mesa and effectively vetoed the nomination of his right-wing successor, Hormando Vaca Diez. Eduardo Rodriguez, the Harvard-educated head of the Bolivian Supreme Court, has assumed the presidency on the basis of promising new elections in December. Many are expecting that Evo Morales, leader of the Movement Toward Socialism (MAS), will be elected president when the time comes.

The struggle in Bolivia involves much more than the removal of elitist politicians from office. The workers and peasants who have taken to the streets are fighting against the neo-liberal policies of big business, and the theft of their natural resources by multinational corporations. Their central demand has been for the nationalization of the country’s massive oil and natural gas reserves.

A Repeat of Events
The current crisis comes less than two years after a mass movement forced then-President Gonzalo Sanchez de Lozada to flee by helicopter to the U.S. Mesa took office promising a referendum on the masses’ demands for nationalization of hydrocarbons. By ignoring these promises and instead defending the interests of the capitalists and multinationals, Mesa brought about his own downfall, as he admittedly faced “more protests than days in power.” (BBC, 6/3/05)

Bolivia’s past radical movements had forced major concessions, including some nationalization of resources. However, the mid-1980s saw a sharp turn towards neo-liberalism dictated by the IMF and World Bank. When natural gas was discovered in the 1990s, foreign corporations swarmed into the country.

Despite being rich in natural resources, Bolivia is the second poorest country in the Western Hemisphere. Thirty percent of the population subsists on less than a dollar per day. Many in the indigenous majority, which makes up 62% of the population, live in ragged shacks and are forced to turn to farming coca (the raw material for cocaine) as the only way to survive. This contradiction between the wealth of natural resources and the poverty of the people laid the foundation for the current upheavals.

The Movement Advancing
The events of early June have proven to be some of the most advanced class battles in recent history. The protests and general strikes that shut down the nation were led by a diverse number of working-class, peasant, and indigenous organizations. The coca growers’ union, the central trade union federation (COB), militant miners, and neighborhood committees in the working-class city of El Alto all united under the banner of “nationalization of the hydrocarbons.”

As the demand for nationalization resonated with the masses, growing layers of Bolivian society began joining the struggle, including teachers and students, since they correctly saw this as the only way to prevent further exploitation of their resources.

The protests grew and a strike loomed large over the heads of the politicians. Road blockades shut down the major cities. Gas refineries and oil fields were taken over and the workers stormed Congress in the capital, La Paz, forcing these scoundrels to scurry out of town. As Congress attempted to convene in another city, the working-class forces grew in strength and numbers.

Bolivian society is beginning to see that the injustices they are fighting will not be solved by replacing one clown with another. A section of workers are drawing far-reaching, even revolutionary, conclusions. At protests, it was not uncommon to see signs stating “Bourgeoisie, your days are numbered” and “workers to power.”

The COB and Fejuve (Federation of Neighborhood Associations, which organizes poor city dwellers in El Alto) have demanded the closure of parliament. As an alternative, they called for the building of a People’s Assembly at a mass meeting of 400,000 participants on June 6.

In El Alto as well as other cities, housing and food distribution have been organized by mass bodies of workers, peasants, and students. Self-defense operations are keeping order throughout the country through mass assemblies and neighborhood committees.

The COB leadership has also set up a “Peoples’ Revolutionary Command,” with the task of gathering unions, popular movements, and political and student organizations around the “strategy of power to the workers, peasants, and impoverished middle-class layers.”

Although the People’s Assembly exercises limited power at the current time, it has the potential of creating a situation of “dual power” in Bolivia, which poses the question: Who will run society, the workers or the capitalists?

The presidency of Rodriguez is an attempt by the ruling class to divert the masses from the struggle. Rodriguez is claiming that he doesn’t have the constitutional power to deal with the demands of the movement. He only promises new elections in December, while the Bolivian and international press continue to entice the population with the idea of a government headed by Evo Morales.

The Role of Morales and the MAS
Morales gained fame as the leader of the coca growers’ union. In the 2002 general elections, he came in second place at 21%. He often pronounces his support of Fidel Castro in Cuba, and he is a close friend and supporter of Venezuelan President Hugo Chávez.

However, despite some radical rhetoric, Morales and MAS have been holding back the movement. He has shown a blatant refusal to break with capitalism. After Lozada’s resignation in 2003, Morales gave support to Mesa. He only belatedly gave lip service to the call for nationalization and for Mesa to resign, due to massive pressure from below.

He is now offering full support, along with the United States and the Catholic Church, to the new Rodriguez government in the hopes that it will divert the working class into the more “acceptable” electoral realm. Morales’ strategy is to guarantee his election in 2007. He stresses a “constitutional way out of the crisis,” rejecting the idea of workers’ power.

While many have illusions in Morales, some Bolivians are seeing through not only this most recent maneuver, but also the politics of Morales himself. The COB even voted to revoke his membership. Many workers are drawing the conclusion that it is necessary to move beyond the limited electoralism of Morales and the MAS.

What Next?
Capitalism never has and never will offer a stable future for the poor of Bolivia and the rest of Latin America. The workers and peasants in El Alto and throughout the country should use the current breathing space to regroup and plan their next steps. But most importantly, the demands and program of the People’s Assembly must be put into action and expanded.

Local assemblies need to be established across the country with elected representatives of the different movements, workplaces, and communities, and these linked up in a national assembly, with delegates subject to recall and without any privilege. Such a national assembly could form a workers’ and peasants’ government that would nationalize the oil and gas industries, the banks, and other major companies under the democratic control and management of the working class and poor.

The struggle also needs to be internationalist in character. Over the last few years, the people of Latin America have shown their willingness to fight for a new society. From Argentina to Mexico, from Brazil to Venezuela, workers across the region have risen up against the neo-liberal policies of global capitalism. The People’s Assemblies need to sound the call to revolution throughout the hemisphere, with the aim of uniting the working class in a democratic socialist federation of the Americas.

The movement must also have a strategy for dealing with the danger of the military being used to crush it. The Bolivian army has been reluctant to step into the conflict so far, but that can change if the capitalist system is threatened. And although Bush is currently bogged down in the Middle East, there is no doubt that the imperialist governments of the U.S. and Europe are watching Bolivia very closely. The military threat is very real, as shown by the recent examples of U.S. intervention in Haiti and the coup attempt in Venezuela in 2002, as well as the long history of military coups and repression throughout Latin America.

The Bolivian assemblies should make an appeal to the rank-and-file members of the armed forces, to deflect any attempts by the elite to use the military against the masses. Soldiers’ committees need to be set up, demanding democratization of the army with the election of officers. The assemblies must organize self-defense, something that the COB has raised.

The Return of Class Struggle
Today, events in Latin America and particularly in Bolivia show the relevance of socialist and Marxist ideas. It was not so long ago that the ideologues of capitalism were proclaiming that not only was socialism dead, but that the working class itself had “disappeared.” Today’s events in Bolivia prove that not only is the working class fighting back, but clearly many are searching for the road to ending the nightmare of capitalism and creating a new society.

The revolution in Russia in 1917 was an historic example of capitalism breaking “at its weakest link.” The key difference between Russia in 1917 and South America today is that Russia had a strong revolutionary party, the Bolshevik Party, that was able to lead the working masses to victory.

Such a party in Bolivia would link the day-to-day demands of the struggle, including the demand for nationalization, to the struggle for a new social order. It would also advance an internationalist program that could link up the struggles across the continent into a decisive challenge to capitalism and imperialism.

The current truce provides a crucial opportunity to organize the workers and peasants into such a force. Only then will the working people of Bolivia be able to liberate themselves from capitalist exploitation, and show the way forward for the working class worldwide.