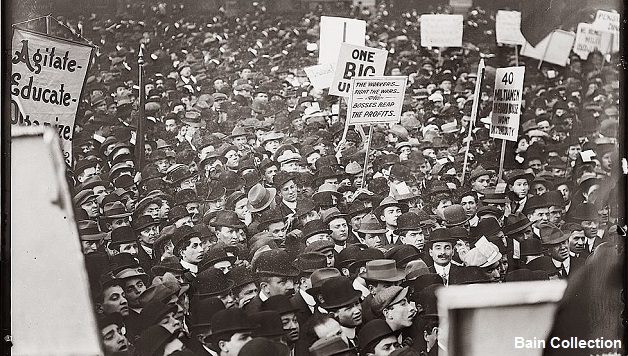 In 1935, Congress passed and President Franklin Delano Roosevelt signed into law the Social Security Act. This Act provided a system of federal benefits for retirees and the elderly. In 1956, the law was expanded to include the disabled.

The Social Security Act wasn’t passed and signed because the politicians were “nice guys” or “looking out for the people.” Whenever any law is passed that seriously benefits workers, it is a concession by big business to the mass movements of ordinary people.

Social Security’s Origins
In 1935, huge mass movements in U.S. society were shaking capitalism to its core. In the previous year, there were local general strikes and demonstrations of tens of thousands of workers in San Francisco, Minneapolis, and Toledo, Ohio. These led to important victories for workers and helped spark a wave of strikes and organizing drives in key industries centered around the newly formed Congress of Industrial Organizations (CIO). This militant labor federation soon grew into the millions.

Massive strikes scare bosses because when we don’t work, they can’t make any profits by exploiting our labor. Strikes hit big where it hurts them most – in their pockets. Strikes also show working people their own collective power and can lay the basis for wider political struggle.

Together, organized with a clear program and clear methods of struggle, we can achieve anything. That’s exactly what the bosses and their politicians, including FDR and Congress, feared when they passed the Social Security Act.

The strikes and other struggles of the 1930s were also connecting broader issues besides the wages and workplace conditions of the people on strike. They took up the issues of the unemployed, the elderly, and the need for broad social programs. Socialist organizations also recruited many members and led mass unemployed organizations.

Under pressure from these struggles, and in an attempt to co-opt the fight into big business politics, the Democrats enacted the “New Deal,” which included Social Security.

The Lessons of History
One reason that led to the labor movement moving into action was the crisis created by the Great Depression, which began with the stock market crash of 1929. Today Bush is asking us to trust the stock market with our Social Security money. This same market crashed 75 years ago, and that was a key reason for the events that led to Social Security in the first place.

The proposal for Social Security privatization is a huge gamble, like shooting craps at a casino – only this gamble is being played with loaded dice. The stock market has gone down recently, and with rising oil prices, a falling dollar, and a ballooning national debt, the market could go down more. We can’t let big business gamble with our future.

With the conditions that we face today, we need everything we can get. Housing and gas prices are up, the cost of higher education is skyrocketing, we’re being robbed by pharmaceutical companies, and budget cuts are going on everywhere. On top of that, corporations have shipped millions of industrial and technical jobs out of the country.

It is damn near impossible for working people to save significant amounts of money for retirement. As of 2000, one third of Americans had no savings at all, and one third have less than $2,500 in savings.

While fighting to defend Social Security as a basic safety net, we also need to raise the need to expand and strengthen it. Currently, Social Security benefits for many are hardly enough to survive on. All retirees should have a government guaranteed pension of at least $500/week, along with free, high quality healthcare as part of a universal national system.

Bush endlessly talks about a “crisis” in Social Security. However, there is a simple solution. The threshold could be reversed so that ordinary people don’t have to pay, and the rich can cough up the necessary money for our Social Security. Simply put: Tax the rich!

Big business and their politicians have already raided Social Security many times to pay for their wars. Lyndon Johnson (a Democrat) raided it to help pay for Vietnam. Bush raided it for the Afghanistan war.

Bush talks about his overhaul of Social Security creating an “ownership society.” His vision is simple: owners do not pay taxes, workers do.

The Democrats have let the framework of the debate become ridiculous. While opposing Bush’s privatization plan, their alternative offers nothing attractive to working people. Rather than showing how Social Security can be maintained and expanded by making the super rich and big business pay, they advocate increasing workers’ Social Security taxes and decreasing benefits!

The history of Social Security has shown us the necessity of organizing mass action to beat back the corporations and their politicians. The leadership of the labor and other progressive movements needs to be challenged to take the lead in organizing against not just the assault on Social Security but also the broader attacks working people face.

But this will require ending these movements’ fatal dependence on the corporate-controlled Democrats. History has shown us that we can’t depend on big business politicians to represent us, but we can use our own social power to fight back and win!