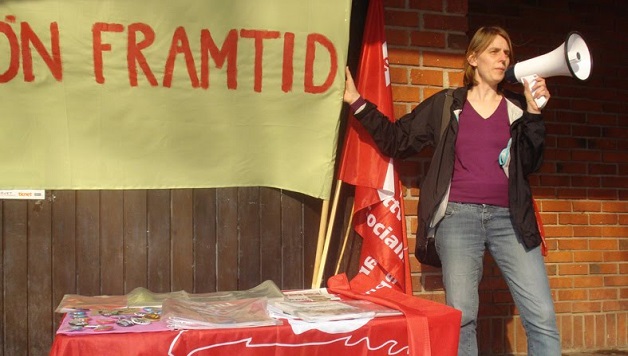 In September, Socialist Alternative sponsored a nation-wide speaking tour by Elin Gauffin, a Swedish socialist-feminist activist. Gauffin is a leading member of the Socialist Justice Party (Rätttvisepartiet Socialisterna), Socialist Alternative’s sister organization in Sweden. In her speeches around the country, she presented the case for the united action of the working class and socialism as the only way to end war, poverty, sexism, and racism. She also spoke about the situation in Sweden, where the gap between rich and poor is widening rapidly and major cutbacks in public services, such as childcare and healthcare, have intensified the exhausting burden on women in society.

Our biggest turnout for Gauffin’s talk was at the University of Minnesota, where 87 people attended. We organized a meeting of 30 students at a local Minneapolis high school, an example of how high school students angered by the war and other issues are interested in radical ideas. Gauffin also spoke at public meetings in Boston, Oberlin (OH), Stony Brook (NY), and Seattle to a total of 384 people. Gauffin’s tour helped make this year’s campus recruitment drive our most successful yet.