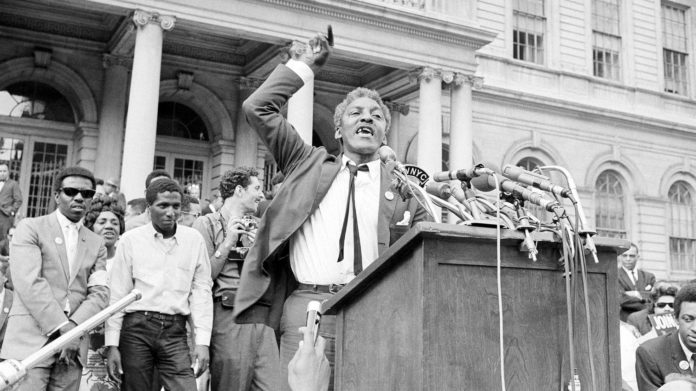 Bayard Taylor Rustin (1912 -1987) left an indelible mark on the civil rights movement as an adviser and organizer of the Montgomery bus boycott and the March on Washington for Jobs and Freedom in 1963. By bringing the method of non-violent civil disobedience taught by Mahatma Gandhi to the U.S., he transformed social protest. But as a gay man, Rustin faced not only racism but homophobia throughout his political life.

Bayard Rustin was born into a middle-class family in Chester, Pennsylvania. His grandparents were active with the National Association for the Advancement of Colored People and the African Methodist Church. They also taught him Quaker values and the method of non-violence to fight back against injustice.

Rustin attended Harlem’s City College in 1938 where he joined the Communist Party. He became coordinator of the Young Communist League’s committee against discrimination in the armed forces. He resigned from the Communist Party, though, in 1941 as the party dropped their civil rights work during World War II.

During the war, he began his decades-long work with A. Philip Randolph, a leading African American socialist and founder of the Brotherhood of Sleeping Car Porters. Randolph was organizing a March on Washington to demand desegregation of the armed forces and protection against discrimination in the defense industry.

After the war, he went to work for A.J. Muste’s Fellowship of Reconciliation, a pacifist organization. He went on to become its youth secretary and began to study the teachings of Gandhi. In 1943, he refused to answer a military call-up and was sentenced to three years in a Kentucky jail. This wasn’t the first time he served time in jail for his political beliefs. In 1942, he spent 30 days on a chain gang for violating Jim Crow laws on a bus.

He became a leading voice in the pacifist movement, traveling to India in 1949 to participate in a conference of international pacifists and met with future leaders of the African liberation struggle against European colonialism.

In 1953, Rustin was arrested with two men in Los Angeles for “lewd conduct.” This scandal forced him to resign from the Fellowship.

From 1955 to 1963, Rustin conducted his most important work. He reconnected with A. Philip Randolph and became an aide to Dr. King during the Montgomery bus boycott, where he taught the methods of Gandhi to the boycott leaders. Along with King, he played a key role in spreading the challenge to Jim Crow to the rest of the south and the leaders of the Southern Christian Leadership Conference (SCLC).

Throughout this period, threats were made by the media to expose Rustin’s sexual orientation and communist background. King himself was under the radar of FBI Chief J Edgar Hoover, who was planning to disclose King’s extra-marital affairs. The threat of exposure forced Rustin to resign from the SCLC and flee the South in the middle of the Montgomery boycott.

However, within a few years Rustin was back on center stage as the national organizer of the historic 1963 march on Washington of 250,000 people. But by this time, a new layer of young black leaders was coming out of organizations like the Student Non-Violent Coordinating Committee, adopting a more radical and uncompromising position against racism which mixed elements of black nationalism with socialism. Rustin moved to the right and became a vocal opponent of the Black Power movement, Black Studies courses, and the ideas of the Nation of Islam. He debated Malcolm X and was correctly seen as conservative by this new layer of activists.

Rustin showed also his pragmatism by opposing Dr. King’s stance against the Vietnam War and the combining of civil rights, anti-war, and economic issues in King’s Poor People’s campaign. This flowed from Rustin’s incorrect strategy of subordinating the struggle against racism to maintaining good relations with Lyndon Johnson and the Democratic Party. The attacks on Rustin throughout his political life for his homosexuality also had taken a toll, and he adopted an increasingly pro-establishment position.

However, at the end of his life he came out of the closet and began to advocate for gay rights and raise awareness about the developing AIDS crisis. He declared that gay rights was the new civil rights movement.

Rustin’s life and work demonstrate the important links between the tactics and methods used during the African-American revolt of the ’50s and ’60s and social struggle today. But it also shows the limitations of these methods.

The civil rights movement challenged and defeated Jim Crow, but was ultimately unsuccessful in ending the structural racism that is built into the foundations of American capitalism. All one has to do is look at education – 50 years after the historic Brown v. Board of Education decision, public schools remain as segregated as they were then.

Rustin faced the challenges of racism and homophobia, personally and politically. His life and struggle, with all its limitations, is a reminder of the rich legacy of the struggles of African-Americans. Today as we remember that legacy, we need to pick up the struggle where those before us left off, this time tackling the root cause of racism – the capitalist system itself.